Trump 2020 & Why the World Needs Another MAGA Win 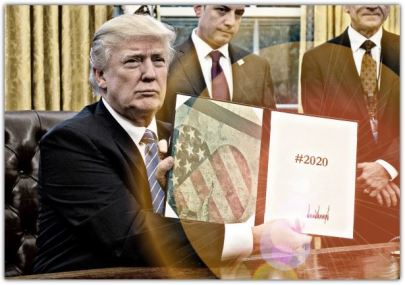 In the book which effectively severed his connection from the French Communists, agnostic French existentialist philosopher, Albert Camus wrote,

‘If everyone believes in nothing, if nothing makes sense, if we can assert no value whatsoever, everything is permissible and nothing is important.’ (The Rebel, 1951)

Camus, a golden-child of the French Communists, famously ‘went against the grain among members of the French left-wing intelligentsia.’ [i] As result ‘Camus was virtually excommunicated from the French intellectual life by Jean Sartre and his comrades’ [ii]

Camus fired a flare out from within the inner sanctum of Leftist elitism. He had fought against fascism in WW2, and saw the terror unleashed in the name of anti-fascism. In this he witnessed an equally oppressive movement, which road on the coattails of false promises, and carefully targeted outrage. His decision to break free exposed the false promises of a utopia built on totalitarianism, and the unquestionable ‘epistemological privilege of the oppressed’ [iii], all enforced by appeasement, and maintained by the buzzwords emancipation and justice.

In the light of Camus’ experience and wisdom, and the past three years, it is no exaggeration to say that the upcoming 2020 election in the United States will be even more important than 2016.

The re-election of the Trump administration will be a decisive and final cut, one that separates a free people from the burdensome shackles of globalism, the smiles, lies and hi-fives of its career politicians, and its bureaucratic caste.

This is why they are in a tail spin, they know that a Trump 2020 win, will be a rebuke of their decades long hold on power. They know that such a win, will give power back to the masses who inherited the responsibility of nurturing the hard-won freedoms handed down them.

They know that a Trump 2020 win will be a loud, unified “no” to fear, manipulation, false promises and the dysfunctional fabric of socialism; a revolt against the burgeoning bureaucratic aristocracy, and it’s globalist imperial feudalism.

They know such a win will be a “yes” to freedom, not a denial of it.

The caveat to this of course is that Trump is no different to any of us when it comes to sin and the need for salvation. Donald Trump is not Jesus Christ or the herald of a golden age. He is the bulwark and resounding “no” of a people who want a return to a government for the people, of the people, by the people. In this Trump at least acknowledges the importance of his office and its role as a servant leader of one nation, under God.

As with the rest of us, Trump still has potential. He is still very much a diamond in the rough. For sure, he has irritating idiosyncrasies. We all do. He may talk about himself far too much, but he at least has the balls to boldly act against the madness of political correctness, the Leftist equivalent of shari’a law; showing that his administration uniquely understands the danger of the political quagmire, the crushing weight of bloated bureaucracy through its forced speech, imprisonment for non-compliance to its irrational ideological standard, and its contempt for Biblical Christianity.

The fact that Trump hasn’t quit under the normal pressure of leadership, or abandoned his post, at every crack of the whip sent his way, by his political enemies, shows character. By not giving up, or irresponsibly giving in, he has expressed value and appreciation for the office he holds and the free, discerning citizens he represents.

Think what you will. Disagree if you must. Trump has proven that he has the chops to fight an unwanted “culture war” thrust upon the West. Nothing changes this fact. He and his team have stood firm, in the face of a contempt and hatred that can only be described as demonic. This is manifest in the manufactured lies, and the hate-Trump-love-trumps-hate dissonance and fear, imposed on the world since 2016.

Our would-be Leftist overlords in the West know that a Trump 2020 win, will be a vote for the restoration of ideas that his office, and his nation were founded upon. In this vote for the restoration of freedom, and the rights and responsibilities attached to it, such a win is not only a win for those in the United States, it’s a win for every man and woman, who cherishes the very concept of liberty, under God, and who, with grateful solemnity, remembers the ultimate price many have paid for it.

Like Camus’ publication of The Rebel, the 2016 election was an historic time of choosing.

The 2020 election in the United States will be no different.

“The martyrs of history were not fools, and our honoured dead who gave their lives to stop the advance of the Nazis didn’t die in vain… The greater risk lies in appeasement; surrender. We’ll [either] preserve for our children this, the last best hope of man on earth, or we’ll sentence them to take the last step into a thousand years of darkness.’ [iv]

A Trump 2020 victory will be a resounding “yes” to freedom from those dragged into fighting the unwanted “culture war” thrust upon the West.