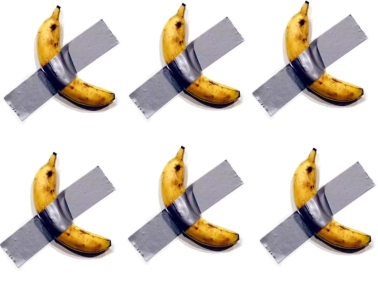 Gene Veith once wrote, ‘secularists are genuinely unable to tell the difference between art that has aesthetic merit and art that has none.’ His words were part of both a critique and lament of the ‘State of the Arts’, and what the world of art has become.

Calling art ‘the plaything of the rich’, ‘art is now considered to be whatever the artist does.’ Art has become a slave to the post-modern mind. Under the foppish, vain lordship of the unhinged, vague emptiness of moral relativity, art has lost all meaning. An ‘impersonal, dehumanised’ and desensitised public, is no longer capable of distinguishing between good modern art and bad.

Rather than speak of and to the human condition, the art of this post modern world is ‘anti-art’. It ‘rejects humanness’, worships ‘the cult of the artist’, and is controlled by the often contradictory ‘elitism of the art world’, whose global membership only amounts to the ‘size of a very small town.’ Where the ‘wealthy elite’ pose as proletarian, as they patron ‘bohemian’ artists in an irony that ‘combines Marxist poses with upper class social snobbery.’

Veith’s criticisms and lament is justified. Notorious examples include ‘a performance artist in Milwaukee who entertained his patrons by screaming abuse at them, stuck fishhooks under his skin and cut himself with razor blades’; and partially U.S. Tax payer funded artists such as, Anne Sprinkle, a self-described “post-porn Modernist” ‘masturbates, then invites patrons to come up and inspect her genitalia with a flashlight.’ [i]

Add to this the masochistic art of Robert Mapplethorpe, Andre Serrano’s ‘Piss cross’, photographs of a crucifix in his urine’, Duchamp’s 1917, urinal entitled ‘Fountain’, and more recently Maurizio Cattelan’s ‘Comedian‘ – a banana taped to a wall with duct-tape.

Last week, Cattelan’s duct-taped banana, called ‘Comedian’, was sold to a French collector in Miami for $120, 000 (175k AU) U.S. dollars. The banana was then eaten by David Datuna, a performance artist.

Gallery officials questioned Datuna then asked him to leave the event, later stating that the performance artist didn’t actually destroy the ‘Comedian’ because the banana is meant to be replaced. As SBS noted, ‘the value of the work is in the certificate of authenticity.’

EJ Dickson for Rolling Stone adds that the Art Basel festival is ‘one of the biggest and most prestigious art shows in the country, even if few know about it.’ The saga didn’t end with Datuna. Dickson stated that after the banana heist, artist, Roderick Webber arrived and wrote on the wall: ‘“Epstein didn’t kill himself” in red lipstick.

Unfortunately for Webber, Datuna’s destruction in the name of art appears to have been more appreciated. Webber’s attempt at protest art saw him ‘arrested on charges of criminal mischief.’ With police escorting Webber out, he could ‘be heard saying “This is the gallery where anyone can do art, right?”

Dickson said that the banana “art work” has now been removed from the gallery due to the “compromised safety of the piece, and those surrounding it.”

Cattelan isn’t new to melodrama. His 18 karat gold working toilet, called ‘America’ was stolen in September, from Blenheim Palace, and is yet to be recovered by police.

“These are our elites: where eating a banana someone else paid $120,000 dollars for is considered a work of art, because somebody put the banana on the wall and called it art.”

Klavan then reminded people that this is from

“the same civilization that created the Sistine Chapel, Hamlet and King Lear. Now art is a banana taped to the wall, and someone is willing to pay six figures to do this. Someone else thinks it’s art to eat the banana, which at least is a joke, and then when they put up something that is actually true about our elites, such as, “Jeffery Epstein didn’t kill himself” they cover it up!”

Had Klavan read Vieth’s criticism in its entirety, I think he’d agree that they were on the same page.

Cattelan, Mapplethorpe, Serrano, Sprinkle, and work that mimics theirs all embody the content of Gene Veith’s lament and critique of the art world today. Although Veith’s analysis is grim, especially when weighed against these examples, he looks to a recovery of the arts where the divine Logos is rediscovered; where ‘artistic talent is not thought of as some innate human ability, nor as the accomplishment of an individual genius, but as a gift of God.’ (Veith, p.107)

To paraphrase, Calvin Seeveld, this recovery will mean the complete abandonment of the foppish, vain lordship of moral relativity, and the subsequent awakening of a desensitised, dehumanised public to an appreciation of the difference between cheap deodorant and good perfume.