Biology Is Not a Social Construct: Why “P” Cannot Equal “Q” Without Perpetual Revolution 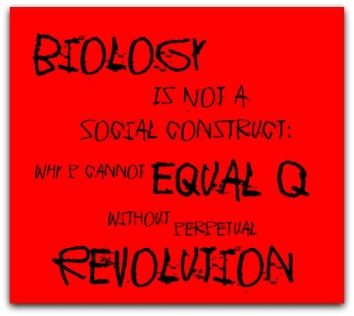 Whether you’re for or against same-sex marriage, room needs to be made for answers to fundamental questions about the consequences and fabric of the issue.

Swiping these away with the empty words of “love is love” or “it’s about equality”; or the equally dismissive ‘’God made Adam and Eve, not Adam and Steve”, does harm to the overall debate.

Dismissals like this rob the debate of substance, thought and meaning.

There are substantial questions which very few people are willing to answer.

Fewer still, appear to have the courage to stand by conclusions that have already been determined by either biology, or worked out through the centuries and, by reason and faith, accepted as tried and true.

Heterosexuals, by matter of their biology and biological function are already ahead of alternative unions which lack this biological function. That it is easier for heterosexuals to have children, for example, isn’t something they’ve chosen. Heterosexuals are born that way. It isn’t a deliberate affront, social construct, or conspiratorial plan to oppress homosexuals.

Yet the tone of SSM advocates places this biological fact and its “superior” function, as an oppressive tool used against a minority group of individuals who, by the inconclusive, and therefore current understanding of science, choose, are groomed, or nurtured into, a sub-culture that is, by all appearances and dynamics opposed to that union between a man and a woman. It is opposed because same-sex unions cannot be the biological equal of the union between a man and a woman.

This raises serious questions like: at what point does the push for SSM, which seeks, outside just provisions already made in Australian law for Homosexuals and homosexual unions, become more about contempt, resentment and heterophobia, than actual equality?

For example, one store in Melbourne took to Facebook to effectively ban anyone who voted “no” from their store:

By precedent, does this “refusal to serve” now mean that Christian bakers, Pastors and other service providers, in Australia, can ALSO REFUSE to bake cakes for Same-sex weddings, should marriage be redefined? Based on examples from countries that have legalised SSM, the answer is no. They would be sued, and as evidenced below, would have to ‘run the gauntlet’ set up by social media lynch mobs, as they are smeared, and destroyed for their dissent.

With so many questions, sitting without answers, all I hear is the mindless and empty retort, “love is love” or “it’s about equality”, which is, as I’ve pointed out here, and here, not an argument for Same-Sex marriage.

In addition, how is SSM not about the imposition of an unhealthy gender segregation that says we should stick to our own kind; since, by definition of homosexuality, there is no reconciliation between the genders of male and female; no loving union between male and female?

There has been no discussion about the role of misogyny or misandry, either. Which is ironic, since misogyny has been, rightly, taken up by Left-wing politicians as a great evil in need of purging.  Does their stand on misogyny make them hypocrites, when they deny the presence of misogyny or misandry when “yes” to SSM supporters vilify “no” voters? 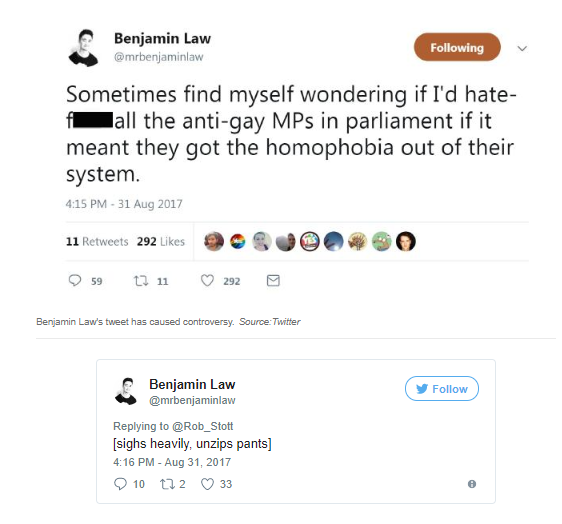 This double standard from the Left is reinforced, by the fact that the Left remained predominantly silent about Benjamin’s ”violent sexual threats”, yet only a few weeks ago, were taking the stick to Christians, claiming that  “Christians were more violent than Muslims”, by exaggerating a study done by W. Bradford Wilcox, in the United States, on domestic violence among American Evangelicals.

Why can’t we get answers to questions, like, how or does SSM, for the sake of self-aggrandizement, seek to undermine, through ridicule, the natural biological union shared between heterosexuals?

At what point can we say “no” to strategies of evasion that circumvent this, such as the false claims that biological sex and all that pertains to it, is fluid?

“P” cannot equal “q” without the violence of perpetual revolution and proposed idea of utopian reconstruction:

In the English speaking world, the letter “p” can never be the letter ”q”. A true ”q” can never be a true “p”, it, despite any claim that would seek to displace ”q” from its true value, would always be a false claim. This is because the identity of “q” is found in it’s relation to the truth value of “p”.

Anything outside this means we are no longer talking about ”p” or ”q”, but a distortion of relationship; a falsification that impacts, not just the value of ”q”, but also ”p”.

To do so would be to commit ”q” to a false truth-value; a construct that in the end, tyrannically imposes falsehood over the correct functions of both ‘p” and ”q”. This reassignment of values, doesn’t just surrender truth to an untruth, it creates confusion in communication by way of relational dysfunction.

At what point can we ask how this push for SSM undermines true equality – does it seek to rip the heart out of the beauty of a man loving a woman and vice versa?

Likewise, does SSM undermine friendships between men and men/women and women, by confusing close friendships with same-sex attraction or homosexual activity?  When can we ask, whether or not SSM will destroy the very idea of friendship?

Where it becomes necessary:

‘in our time to rebut the theory that every firm and serious friendship is really homosexual. The dangerous word really is here important. To say that every friendship is consciously and explicitly homosexual would be too obviously false…[unfortunately, though] The fact that no positive evidence of homosexuality can be discovered in the behaviour of two friends does not disconcert the wiseacres.’ (C.S. Lewis, 1960) [ii]

Biology is not a social construct. Demanding that the world eradicate, in the name of so-called equality, the recognition of the biological union between a man and woman, that commitment and marriage seals, is an attempt at reconstruction. It is classical Marxism, involving the creation of a social construct built up and imposed on society, by the very people who claim to fight against one.

How does this debate involve Marxism? At the core of Marxism, Leninism and the socialist agenda is perpetual war. Will SSM become a perpetual war because the goal of biological equality, should that be the aim of the LGBTQ movement in regards to SSM, can never be reached?

The main goal of Marxism is perpetual war/revolution against those who stand opposed to what they say you shouldn’t be opposed to. You are, will, do and say, what they tell you to, or else. :

‘The building of socialism implies the destruction of capitalism…To forget this is to forget socialism. Socialism, Lenin noted, “is not ready-made system that will be mankind’s benefactor. Socialism is the class struggle of the present day proletariat as it advances from one objective to another objective tomorrow for the sake of its basic objective, to which it is coming nearer every day.’ (Fedoseyev, 1980) [ii]

Based on the imposition of this “revolution” and it’s new cultural law/s, and the actions of those on the “yes” side of the SSM debate, just being a heterosexual could one day, if it isn’t in some circles already, be considered a crime against the “revolution”.

As such, our young and the unborn will be the victims of this “revolution” in the name of an (unattainable and unrealistic) equality.[iii]

Where, then, will the insatiable desire be countered? At what point will humanity, hand in hand with reason and faith, draw a line in the sand and so no more?

Will the “no” of future generations be far more determined and perhaps violent? Generations who were handed over to confusion, loss and fear, their pain ignored, all in the name of mindless, feel-good, slogans such as “love is love”?

This raises some final questions: Is SSM really about a demand for a biological equality, where there, biologically cannot be equality?

Such as the biological fact that two women, or two men, cannot procreate together; Where they cannot become one flesh. At least not at the moment, and certainly not in the future, without the aid of petri dishes, test tubes, chemicals, and or mechanical apparatuses; a sedated polis, and twisted science.

By the tone and language of most SSM advocates, the very existence of any natural biological union between a man and a woman, [I would add within the boundaries of cohabitation and commitment], and any who celebrate that union, can be viewed as being oppressive towards the LGBTQ.

Suggesting that, by way of their very existence, heterosexuals are offensive to homosexuals. If true, does this mean that every male and female in their “yes” to each other, whether within committed cohabitation (defacto) or sealed by marriage (dejure) stands as a “no” to same-sex marriage?

What eventually will humanity, in particular heterosexuals, be demanded, subjected or commanded to consent to?

At what end, will this “revolution” find its own answers and closure? Is it, by all current social trajectories, possible that the imposition of new cultural laws, under the Rainbow Flag, ends tragically with: “The existence of “breeders” should only serve one purpose”?

[iii] Ardent, H. 1936 On Revolution, as Hannah Arendt argued, in her discussion on the French Reign of Terror, ‘revolution must devour its own children, [and in the case of France, “perpetuate a sequence of revolutions”]’  (p.57) 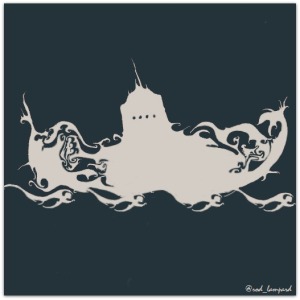 When we get past the cartoon images and mockery, Noah, at the command of God, was essentially the Ancient Near Eastern equivalent of a naturalist. He knew how to grow food, make wine, care for animals and build.

With God at the helm, Noah, and his family, in the face of recrimination and direct opposition, faithfully nurtured a carefully coordinated exodus out of moral chaos and self-destruction.

Drawn back from the veil of its Sunday School drawings, and oversimplified Atheist polemics, Noah’s story is about surgical renewal. It is about the preservation and conservation of creation.It is the application of strong medicine with the aim of total restoration.

With God, not just at the centre, but by choosing to be by humanity’s side, Noah and his family are man and woman equally united before God, against a darkened and morally corrupt World.

At it’s core is God’s determined push back against the Abyss and its fanatical legions; who seek the slow extinction of humanity through the happy intoxication of excess, ignorance and unbelief. From which humanity is viciously guided towards the precipice of its total self-annihilation.