Coleridge: Where But God’s Shadow May Fall, Grief Cannot Be!

‘Lord, even as Thou all-present art,

O may we still with heedful heart

Thy presence know and find!

Then, come what will, of weal or woe,

For though tis Heaven thyself to see,

Where but thy Shadow fall, Grief cannot be!’

I seem to be on a roll with pictures of some of the scenery surrounding us.

Despite being temperamental at times, the Australian climate is both breathtaking and beautiful. It compliments the landscape, consistently outshining itself with every announcement made about the close of each new day.

It maybe a little long in the tooth, but if I had to name the photo I would ‘christen’ it: “Autumn blossoms and cold skies roll in from the West.”

Making a slightly divergent post away from theology for today.

The view this morning reminded me of the fishermen’s axiom. (or should that be fisherperson’s axiom?)

Very thankful for the rain.

I guess the “red sky in the morning” axiom rings loud with truth.

Funding the time to practice, and find gratitude for the time and space to study is not always easy.  I did, however, manage to get in some post-homeschool afternoon reading today.

It is true that water falls and land descends.

But, it is also true that land ascends as water falls.

Even though a riverbank may burst,

the land will re-appear.

Some time has passed since I’ve linked some of the great articles I come across.

So I decided to end the weekend by sharing a few. Should you get the chance, I recommend taking the time to browse their archives .

1). Walter wrote Context is Everything in February stating that

‘it is a dangerous thing to interpret God’s word out of context’.

His words reminded me of the many times I would hear the words ‘context is everything’ as I studied.

”It seems very manipulative and arrogant to use God’s name to get someone to feel or do something.  It doesn’t even matter what you say after those words, simply by using them, it sets a wall up and discredits whatever you say. It’s especially awful to say “It is God’s will” after something unfortunate happens to make them feel better.  We need to be careful with those words, perhaps only saying them after scriptures and not human events.”

3). 5 Blogging, Publishing, & Writing Misconceptions: Katie’s article highlights some insights from her experiences as a published writer and seasoned blogger. Of special interest is Katies conclusion, stated under Misconception #5 – To be a successful blogger, I just need to write:

“Writing is a very small part of what makes a successful blogger/author/writer… so I’ve learned.Blogging is a community.”

4). More and Mores (and Morays): In assessing the concepts of natural and unnatural within the context of social constructs, Scott asserts that

“the equating of what is natural with what is acceptable completely misses the point of what morality is. I must make the observation here that moral behavior is always at odds with our “natural” tendencies – that’s precisely WHY moral behavior is revered and respected!  Call me Master-of-the-Obvious, but isn’t the reason we value truth-telling precisely because we know we all have a natural tendency to lie?…By definition, moral behavior is not natural. If anything, I’d say it’s…well, kind of…supernatural”.

5).Christ has witnesses outside the Church: Kevin posted some sound quotes discussing a little bit about Barth’s rejection of ‘natural theology[i]‘ , and it’s relationship to the visible and invisible Church. As I wrote in the comments, I came across a ”hint” of this in my recent reading of CD.1.2:181 where Barth discusses the ”Virgin Birth” and those who deny it. e.g.: ”It is within God’s counsel and will to make this possible, just as it cannot be at all impossible for Him to bring anyone to the knowledge of Himself even beyond the sphere of the Church visible to us”.. The key to understanding the ‘hints’, for me at least, is in his words: ”beyond the sphere of the Church visible to us”.

[i] i.e.: human attempts to reach the God, which inadvertently misses the fact that he reached, reaches and is reaching out to us.

A Singular Signpost & The Subtlety of Substance

Faith is the assurance of things hoped for, the conviction of things not seen. 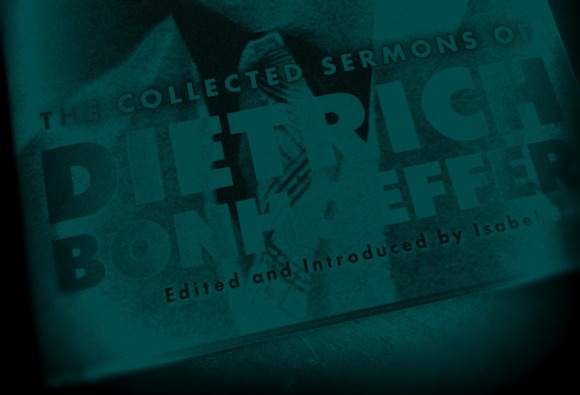 A Collection of Sermons from Dietrich Bonhoeffer, something I’ve been hanging out to read for a while, arrived today.

In the process of browsing through the texts, some statements in particular held my attention:

The historical context of this sermon is Lent and Hitler’s coming to power in Germany, January 1933[i].

‘Gideon responded, “but sir, how can I deliver Israel? My clan is the weakest in Manasseh, and I am the least in my family.” The Lord said to him, “But I will be with you…” (Judges 6 – 8)

‘Who would be willing to say that he or she has never heard this call and has never answered, as Gideon did: Lord, with what am I supposed to do such great things? But then Gideon is silenced; today as just in those days, he’s told to shut up. You’re asking, “With What?” Haven’t you realised what it means that this is God calling to you? Isn’t the call of God enough for you; if you listen properly, doesn’t it drown out all your “With What” questions? “I will be with you” – that means you are not asked to do this with any other help. It is I who have called you; I will be with you; I shall be doing it too…

…Do you hear that, Gideon of yesterday and today? God has called you, and that is enough. Do you hear that, individual doubting Christian, asking and doubting Christian? God has plans for you, and that does mean you. Be ready and see to it. Never forget, even when your own powerlessness is grinding you down to the ground, that God has phenomenal, immeasurable, great plans for you. I will be with you.

…Gideon conquers, the church conquers, we conquer, because faith alone conquers. But the victory belongs not to Gideon, the church, or ourselves, but to God. And God’s victory means our defeat, our humiliation; it means God’s derision and wrath at all human pretensions of might, at humans puffing themselves up and thinking that they are somebody’s themselves. It means the world and its shouting is silenced, that all our ideas and plans are frustrated; it means the cross. The Cross over the world…

…The people approach the victorious Gideon with the final trial, the final temptation: “Be our lord, rule over us.” But Gideon has not forgotten his own history, nor the history of his people…The Lord will rule over you, and you shall have no other lord….Beside us kneels Gideon, who was brought through fear and doubt to faith, before the altar of the one and only God, and with us Gideon prays, Lord on the cross, be our only Lord.

The content of the sermon reflects a response to the ideological ‘will-to-power’ present within fascism, spreading its hands across Europe at the time. The overall text of the sermon hints at Bonhoeffer’s political theology. Here he firmly warns us that human loyalties may sway, but the Lordship of Jesus remains intact as a matter of fact.

Bonhoeffer appears to be saying that because of God’s grace there is only one Lord. He alone, is for us – to be our God and we His people. He stands against us in His loving Yes to us. Even though humans may seem to succeed for a time in their pride filled quest for lordless power, they are inevitably confronted with ‘defeat’ and ‘humiliation’; ‘the world and its shouting is silenced’ by ‘the cross of Jesus Christ – that means God’s lordship over the world.’[ii]

For me, the relevance of Lent and Ash Wednesday is apparent. This gives weight to Bonhoeffer’s chief point, and is made all the more intense with references to ‘dust’, ‘faith in action’[iii], humiliation and defeat. In addition what is seemingly stated to contrast with the Swastika (or crooked cross), a symbol now synonymous with Nazism, Bonhoeffer’s ‘cross over the world’[iv] remark is subtle, and deliberate, highlighting a theologically well defended political subtext.

In pointing us to the liberating contents of the Biblical genres, Bonhoeffer is reminding us that Jesus the Christ reigns, as Lord, over the lords of this world, whether they (or we) like having Him as their (our) Lord or not[v].