Joe Rogan’s $100 million dollar switch from YouTube to Spotify, has been met with controversy over concerns Spotify have censored the ‘Joe Rogan Experience’ podcast.

According to PodNews there are ‘46 episodes missing’.

Variety Magazine stated that most are ‘[“]far-right[”]  commentators’ such as Stefan Molyneux. Others include personalities such as Tommy Chong (Cheech & Chong fame), Alex Jones (Info Wars) and Mikhailia Peterson (daughter of Jordan Peterson) – among others.

Variety’s overall report was smug. Todd Spangler pointed out that YouTube and Twitter had ‘kicked Stefan Molyneux for alleged hate-speech violations.’ Then passive aggressively accused Rogan, and Spotify of being a ‘willing platform for the far-right fringe.’

(It’s no surprise ‘Spotify and Rogan didn’t respond to requests from Variety to comment.’)’

Variety did, however, clarify that ‘Spotify will become the exclusive distributor of “JRE,” Rogan will maintain full creative control over the show under the agreement. [Additionally,] some content won’t be available until later in the year’

Mikhailia Peterson voiced her own concerns about potential censorship, in a Twitter thread that challenged Spotify to explain why it hadn’t released the full catalogue, when that was what had been advertised. 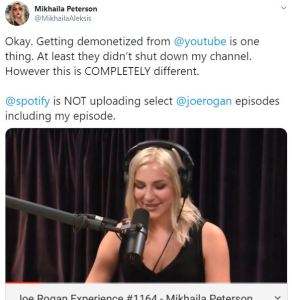 Cancel Culture, and its new Spanish Inquisitors running off (toxic) Intersectionality rubrics, give good reason for the concern.

Does Spotify not releasing the full catalogue, imply future censorship?

The Rogan Experience isn’t for everyone, but as Bari Weiss wrote in May (before her protest resignation from the NYT), Rogan is filling a gap left by the skittish mainstream media.

A media too scared to tell the truth, unless it supports an organize myth, is safe-space friendly, and blue check verified.

False doctrines which sit at the core of new cultural laws, pushed onto Western society by the radical left.

New cultural laws that are enforced by the silencing of any opposing viewpoints that may function as a correction in the struggle to replace lies with the truth, and half-truths with the facts.

‘while GQ puts Pharrell gowned in a yellow sleeping bag on the cover of its “new masculinity” issue, Joe Rogan swings kettlebells and bow-hunts elk…The prestige press has become too delicate, worried about backlash on Twitter and thus is shying away from an ever-increasing number of perceived third rails.’

With the eventual ‘exclusive’ move from YouTube to Spotify, and the censorship concerns, Rogan has denied that he’s sold out, or that the deal would limit his ability to maintain the show’s straight-talking, raw, free exchange of ideas.

While mocking Alex Jones, and expressing contempt for Stefan Molyneux, Forbes, senior contributor, Dani Di Placido criticized Rogan for associating with ‘pseudoscience and bigotry.’ Claiming that Rogan was ‘amplifying destructive voices’, then lecturing him on how allowing those voices a platform ‘isn’t the same as platforming quirky outsiders.’

Placido, joined some leftists in all but applauding the idea of censoring Rogan, saying that it ‘made sense’, and that this new deal might be Rogan ‘moving away from the baggage of his past.’

Answering the controversy over censorship, Rogan said that, “[Spotify] want me to just continue doing it the way I’m doing it right now,” It’s just a licensing deal, so Spotify won’t have any creative control over the show. It will be the exact same show.” (Forbes)

While cancel culture’s vultures circle the deal, posturing elation at the thought of converting Rogan through fear of cancelation, and/or muzzling yet another alternative media personality, the biggest concern for Rogan could be distribution.

BNN Bloomberg said that being exclusive to Spotify, ‘Rogan was taking a risk. There’s a chance he will lose the majority of his audience, since Apple accounts for more than 60 per cent of listeners for most podcasts.’

From Peterson’s caution about censorship to Placido’s jubilation at the prospect, there’s general agreement across the board.

It remains to be seen whether the formidable, freedom-loving Rogan can stop cancel culture from getting its cold, boney death grip around the Joe Rogan Experience, and ripping its heart out on altars built by our would-be leftist overlords, in worship to their prevailing anti-liberty ideological hegemony.

I’m not a huge fan, but I’m optimistic. The reason why is worked out in what is, in my opinion, one of Rogan’s best anti-cancel culture discussions on the net: #1006: Jordan Peterson & Brett Weinstein.

The other side of this is that Rogan didn’t just arrive on Spotify. His unique podcast, and hard work got him there.

Photo by Austin Distel on Unsplash

American conservative media organization, PragerU, is facing an uphill battle against an increasing trend towards censorship of conservative content.

Founded by Dennis Prager in 2009, and currently run by CEO, Marissa Streit, PragerU provides commentary and information on a wide range of subjects, from prominent thinkers and doers. PragerU also considers themselves to be a platform for the preservation of Judeo-Christian values, and “the concepts of freedom of speech, a free press, free markets and a strong military to protect and project those values.” (PragerU ‘What we Do’)

“PragerU has officially filed a new lawsuit against Google and YouTube in the state of California [over unjustifiable censorship].

According to a PragerU Twitter post, Spotify’s reason for blacklisting the organization, was because their content didn’t ‘comply’ with Spotify’s editorial policies. Consequently, Spotify “stopped all existing ads, and stated that they will not be approving any new ones.” (PragerU Twitter) Not only this, but as of the January 26th, PragerU, “still hadn’t received any explanation from Spotify as to which specific policy we didn’t comply with.” (PragerU Facebook)

PragerU’s battle against censorship began in 2016[i], with decisions from YouTube to place some PragerU content in the “restricted mode” category. Videos like ‘Don’t Feminists Fight For Muslim Women?’ and ‘Are the Police Racist?’, among 100 others, such as the counter Marxist, Jordan Peterson, information video, ‘Dangerous People Are Teaching Your Kids’ and ‘The Suicide of Europe’, are deemed by Google as being “inappropriate for the younger audiences.”[ii]

Since 2016, PragerU has experienced controversy after controversy, with other social media platforms also restricting PragerU content. Facebook removed videos from PragerU’s three million plus, strong Facebook page, only later reinstating those videos, along with an apology, because “the videos in question were mistakenly removed. While we continue to research what caused this error, we have restored the content because it does not break our Community Standards”[iii]

If you’re up to date with the developing concerns over big tech companies threatening to censor conservative content, and big tech companies actually censoring conservative content, you’ll know that an ambiguous reason like, “mistakenly removed”, in all probability means, “removed by an employee, who took personal offence to the content, acted unanimously, making a subjective (highly unprofessional) decision to delete it.”

Although, in this case, Facebook deserves kudos for acknowledging the error and fixing it; the increase in uncalled for restrictions on content that challenges the overarching ideological predisposition of the big tech companies, should be of deep concern to everyone. It is a direct threat to the right to freedom of information, freedom of speech, and the right to come to conclusions independent of those who may seek to make us co-dependent on them.

For now, PragerU, and organizations like Caldron Pool are free to publish content in line with the values and faith that made, and still makes, the West a destination for many.

For now, PragerU stands as a city on a hill, at the forefront of a conflict that is unnecessary, unethical and uncalled-for. Even though doors are being shut on PragerU, as long as PragerU stands by its mandate, as outlined in their mission statement, they will continue to be that city, providing an open door for discussion, which runs against the stream.

Also published @ The Caldron Pool, 4th February, 2019 under the heading: PragerU’s Uphill Battle Against Censorship As Ads are Permabanned by Spotify

We Are More Than What We Own

I came across this reinterpretation of ‘Be Thou My Vision’ while listening to the Spotify playlist ‘Hymns for Hipsters’.

Rend Collective’s version is addictive. I’m also in awe of the fact that they didn’t omit verse three. Of which, the more modernised versions seem to generally leave out.

Thou my best Thought, by day or by night,
Waking or sleeping, Thy presence my light.

Can remind us that ‘negativity wastes life, that sin drains us of our strength’, so we are to ‘seek God first, and his righteousness. Because He is our refuge and strength, a very present help in trouble[i]

I ever with Thee and Thou with me, Lord;
Thou my great Father, I Thy true son.

That, ‘all who are led by the Spirit of God are children of God. For we did not receive a spirit of slavery to fall back into fear, but have received the Spirit of adoption, as sons and daughters, by whom we cry, “Abba Father”[ii]

Be thou my battle-shield, sword for the fight.
Be Thou my Dignity, Thou my Delight;
Thou my soul’s Shelter, Thou my high Tower:

That, ‘a person’s life does not consis

t in the abundance of their possessions’[iii]; we are more than what we own,  and we are not what forces outside of God try to define us as[iv]. The temporary power of the world is a borrowed one; ‘these powers are confronted by the ultimate word already spoken.[v]’

Riches I heed not, nor man’s empty praise,
Thou mine Inheritance, now and always.

That, we are called to ‘live wisely in evil (extreme?) days[vi], not by the way of eye-service, as people-pleasers, but as servants of Christ, doing the will of God from the heart, rendering service with a good will as to the Lord and not to man’[vii]

Finally, the words of this hymn can remind us that, the ‘Bible is not the telling of a dream, something viewed only as transcendent (beyond us), without relevance or connection to actual reality…Because in spite of all appearances[viii].

Scripture is victorious over the world because it attests to the light of Jesus the Christ. Victor![ix]

(h/t Jenny, from DelightfulOak.com for introducing us to the phenomenon that is Spotify)