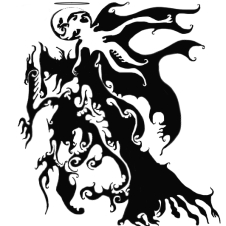 Weightless effigies collide in a disembodied world.
Time and space melt through pixelated moulds.
Ambulating artefacts plugged into wire, fiction,
and the illusion of communal hold.

Minds are plunged into formlessness.
There is no such thing as peace.
Life plugged into lifelessness,
.      where reason and faith cease.

Human blood runs through silicon veins,
.   false achievement becomes a commodity,
.            buying and selling souls chained to the game;
.   false lords, colluding with extremes,
Masters to slaves,
.            forcing the fight for existence between gambit and guillotine.

The society of strangers lined up in drab, conforming rows.
Thought, faith and true freedom, filtered out from within the flow.

But, lightening moves knighted apparitions,
.      there one second, then gone the next.
Holy attendants, heads covered in hoods.
Concealed by the night, as if concealed by soot.

“For God still lives, and so, God speaks.
The arrogance of human revolution is breached
Know, He comes,
.          the new exodus, claimed via Crucis.
The once and forever,
Prince of Peace, God’s only begotten Son.”

‘…the poor man that loveth Christ is richer than the greatest man in the world that hates Him.’