Nearly Half of The Blood Shed in the 20th Century Was Caused by Socialism, so Why Is Socialism Still Promoted As a Positive Alternative to Capitalism

The tear in the Belle Epoque (beautiful age) began in 1912 with the criminal, and avoidable, loss of lives on the Titanic.

The whole veil of the Belle Epoque was ripped apart and exposed for what it was, when the first shells fell in 1914, and when the Bolsheviks, violently resigned Europe to 72 years of socialist hell in 1917. The age of the Übermensch; the age of man conquering mountain, myth, monster and supposedly, God, came crashing down.

Bill T. Arnold sums it up:

‘The 20th Century proved to be the most violent century of world history, dispelling the myth of humanism that things are improving and that the human spirit is gradually evolving into greater and better things. The statistics tell the story. Though scholars who study such things are not agreed with the specifics – as far as total numbers are concerned – most estimates range between 160 million and 200 million deaths in the 20th Century are related to war and genocide. About half of these are war related, while the remainder are credited to politically motivated carnage, typically communist oppression.’

So, it’s encouraging when something like this seven day poll run by the satire Facebook page, Journalist Excellence Worldwide, probably didn’t go where some people might have hoped it would.

Still, the 20,160 (36% in support of Socialism) is an alarming number. That’s 20 thousand people who are either ignorant of the hatred, division, bloodshed and violence which follows Socialism, or they simply don’t care about the MILLIONS of victims of the socialist/Communist oppressive, and murderous, economic platform. What’s worse, it’s probably safe to assume that most of those who voted in favour of Socialism, believe themselves to be loving, highly educated, and tolerant individuals.

However, polls aren’t everything, and given that the pollster is a parody account, it’s not all good news.

The seduction of socialism continues to grip the hearts of young people, who’ve been taught that Socialists are freedom fighters – upstanding citizens who kill, steal and destroy, all supposedly for the greater good. It is assumed that a socialist is, and can never be, sinful [i]. 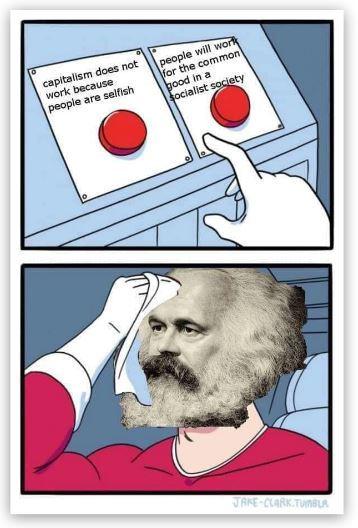 The false dawn in promises of a Utopian society appears to be too much of an allure for the young and impressionable.

‘They say those who won’t learn from the past are doomed to repeat it. And narcissistic, selfie-obsessed millenials are proof to the veracity of that claim. Almost two-thirds of individuals born between 1981 and 1996 view Socialism in a positive light.’

The symptoms of which include the following:

1. Self-deception; ‘a shared illusion of invulnerability which leads to overoptimism and causes planners to fail to respond to clear warnings of danger […] along with an aversion to taking extraordinary risks’

2. Pride; ‘Ignores all warnings and construct rationalisations in order to discount them’

3. ‘has an unquestioning  belief, inclining members to ignore the ethical or moral consequences of their decisions’

4. ‘holds stereotyped views of the leaders of enemy groups. Those leaders are seen as so evil that there is  no warrant for arbitration or negotiation; the enemy leaders are viewed as too weak or too stupid to put up an effective defense.’

5. ‘where direct pressure is piled onto an individual who momentarily expresses doubts about any of the groups shared illusions or questions the validity of the groups arguments.’

6. ‘where ever unanimity has become an idol; displaying avoidance of anything with deviates from what appears to be the group consensus.’

This is the warning of sign of Voltaire’s indictment on the Catholic Church, “écrasez l’infâme” (crush the loathsome thing); the battle between reason and regression (Emil Brunner, 1954).The toxin that is group-think overrules the ability for supporters, and members, of the Socialist religion to comprehend the suffering caused by it.

“…brother will deliver brother over to death, and the father his child, and children will rise against parents and have them put to death. And you will be hated by all for my name’s sake. But the one who endures to the end will be saved.” (Mark 13:12-13, ESV)

If social media polls are to be believed, it’s encouraging to see that people are not quite yet sold out to the idea of ditching the Capitalist economic model.

Because, history dictates, when it comes to fun facts about Soviet Russia, and Communism in general, apart from Sputnik,  Yuri Gagarin, and Glasnost there are none.

[i] ‘One of the most deceptive illusions about sin is the fact that even the worst sinners are often such “nice people.” (Psychiatrist, Karl Menninger, Whatever Became of Sin? 1976, p.126)