Archives For Jesus Among Other Gods

Orderly Disorder: The Book of Numbers & Sun Tzu’s Five Pitfalls of A General

The contents of Sun-Tzu’s, The Art of War and The Bible are unrelated.  They are, by any quick comparison, worlds apart. The Art of War is a masterpiece in military organisation and strategy. Tzu is a sage, giving the wealth of a sage’s advice to all who would follow his counsel closely.

The Bible is a collection of books, filled with multiple genres, following centuries of the same consistent theme: Yahweh’s faithfulness to His people and His war against the human made gods and idols of the Ancient Near East.

Written by multiple authors the witness of the Biblical authors often jars us because of its contrasts between God’s faithfulness and humanity’s infidelity; an unfaithfulness that includes humanity turning on itself, as much as it turns against the faithfulness of God. Through poetry, proverbial wisdom, historiography; prophecy, a litany of apocalyptic fulfilment and predictions, historical letters and genealogies, the Bible is the unique testimony of God’s decisive interaction with humanity.

Where these testimonies differ:

The Art of War is a manual and an impersonal memoir. In it the wisdom and experience of Chinese Army veteran, Sun-Tzu is encapsulated in a list of haiku like principles. Whereas The Bible, from start to finish moves from point to point, through very human voices, who testify to this unique encounter with the revelation of God. What we hear is God fighting for us, embracing us, raising and continuing to raise humanity, through the promise and fulfilment of His Covenant (Treaty with humanity). What we see is God raising men and women up out of sin and its grip on humanity, as sin hurtles humanity like a projectile towards inhumanity and total self-annihilation.

What The Art of War and parts of The Bible share in common is the way in which truth and experience is communicated through metaphor, simile and poetic syntax.

‘A rushing torrent/carries boulders/on its flood; such is the energy/of its momentum’ [i] (Sun-Tzu, The Art of War)

‘Again I tell you, it is easier for a camel to go through the eye of a needle than for a rich person to enter the kingdom of God.” (Jesus Christ, Matthew 19:24, ESV)

Truth and experience is camouflaged in metaphor so as to make an impact that will be easily memorised, if not understood right away.

The relationship between The Art of War and The Bible is established in its use of poetic language to recall history and communicate truths, through narrative and poetic prose.

If there is a commonality of literary technique, is there be any relevance between the two? Can The Art of War help us better understand The Bible?

My answer is yes.

Though, it’s cultural setting, ethnicity, context, authorship, and in most areas its contents are worlds apart, sections of The Art of War lights up our perspective of ancient society, politics and warfare.

Much like Machiavelli’s, The Prince, The Art of War gives us insight into areas of human behaviour, organisation, rule and movement. These include leadership, social organisation, paradox ( + dialectic)[ii], relationships, management, hierarchy, strategy and, in a few specific places, the value of human life.

‘[Force] March ten miles for some gain/and two in three men will arrive’[iii] (Sun Tzu, The Art of War)

Commonality between the Bible and The Art of War can be found. Much of the first five books of the Bible, (the Pentateuch; Torah) discuss the state of the human race, God’s creation, liberation, government and ordering of humanity, centred within and viewed through the lens of His people.

God’s ordering, this governing, His leadership through a close friendship with Moses, is exemplified in the post-Exodus wilderness dwelling Book of Numbers.

Here Yahweh’s request under the Covenant He established with Israel is His way of bringing the Hebrews FULLY out of Egypt. The Hebrews had not completely left subservience to Egypt and its gods behind. As evidenced by the Golden Calf, one coup attempt, a number of formal protests and general disgruntlement about how much better things were under Egyptian rule. In other words, how much better things were under the rule of Egypt’s hybrid animal-human gods. Psychologically & culturally, God’s liberation of the Hebrews was as much reformation of the heart as it was God’s revolution and His emancipation of an oppressed people.

Yahweh’s leadership is brought to trial. The just God is thrown unjust criticism and all manifestations of his grace through the miraculous provision and care given towards His people are forgotten.

The confrontation causes conflict. Yahweh seeks to take the focus of the people off the creature and put it onto the Creator; and in doing so God shows just how far He has to go in order to bring His people completely out of Egypt. This is to teach them that they are no longer Egyptians, but are His, living under His grace, guidance, blessing, leadership; fatherhood. All this things are given in order to bring about the fulfilment of prophecy. The promise of the Covenant, and the transforming determination of God, sees the Hebrew slaves become the nation of Israel. The gods humans made are directly challenged by the God who made humans.

In a sense, even though the victory is won, Yahweh is still fighting against the gods of the Ancient Near East. He is still fight for those He made in His image. Yahweh, the One who is free, putting Himself between us and the house of slavery, despite our flirtation with the worship of nature that characterises all gods and idols man and woman makes in their own image.

Yahweh is the model of a perfect General (Exodus 15). He avoids Sun-Tzu’s list of pitfalls for a General, whilst His people (and even Moses from time to time) falls right into them:

The book of Numbers teaches us that God perfectly hears us, has perfect self-control, can be provoked to anger, but is patient, quick to restraint and shows mercy by way of warnings and provision.

The Gospel of Mark testifies to the healings and deliverance so engrained in the fabric of Jesus Christ’s ministry, up to the point where He reaches for the Leper, stills the wind and waves, is feared and mocked by demons, joyfully dignifies the woman with uterine bleeding and despite the mockery of a crowd of mourners, in the presence of her parents, resurrects a 12 year old girl.

‘I have been crucified with Christ. It is no longer I who live, but Christ who lives in me. And the life I now live in the flesh I live by faith in the Son of God, who loved me and gave himself for me.’ (Paul, Galatians 2:20, ESV)

The Bible and The Art of War teach us to be aware of the pitfalls of human leadership and the arrogance of power. Only God is the perfect General. We actively seek out failure, when we fail to acknowledge and follow Him in all our ways.

The Art of War:

‘These five perils to leadership demand the most careful attention’ Sun-Tzu, The Art of War.

[ii] For example: ‘Orderly disorder is based on careful division; courageous fear on potential energy; strong weakness on troop dispositions’.

The Denial of Christ Is More About Prejudiced Conclusions, Than Facts 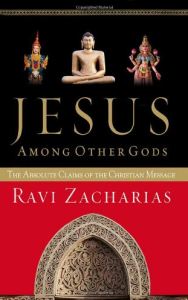 It wasn’t what I was expecting. Initially, I anticipated there being more of an in-depth academic analysis of the history and differences between Islam, Hinduism, Buddhism, Western Ideological Progressivism and Christianity. Although an analysis exists, it’s often short. Because of this, at times, it seemed as though Zacharias was too brief and ended his discussions far too quickly.

This doesn’t hinder the potency of the text as a useful resource for deep thinkers. It’s full of take away points worthy of further consideration. His focus is squarely on presenting the uniqueness of Jesus Christ, and how that fact is a relevant challenge to the dominant philosophical and religious apparatus’ that permeate both East and West. Zacharias is aware of his audience and subject; presenting blunt, to-the-point facts and conclusions, drawn from experience and research.

For example:  ‘post-modernism best represents a mood (a potentially dangerous state-of-mind) where reason can be crushed under the weight of feeling.’[i]  It’s a good summary, buttressed by Zacharias’ own admission that

‘the difficulty [in writing the book] was not in knowing what to say, but in knowing what not to say. We are living in a time when sensitivities are at the surface, often vented with cutting words…Philosophically and morally, you can believe anything so long as you do not claim it to be true or a “better” way. Religiously you can hold to anything, so long as you do not bring Jesus Christ into it.’[ii]

Consider the well orchestrated neo-tolerant slogan, “religion of peace” vs. the popular rejection of those who authentically (read:humbly) follow the Prince of Peace (Isaiah’s prophetic reference for Jesus Christ – Is.9:6).We live in a fractured and noisy world, Zacharias, in his approach, seeks to move through it.

‘The denial of Christ has less to do with facts and more to do with the bent of what a person is prejudiced to conclude. After years of wrestling with such issues in academia, I have seen this proven time and again.’[iii]

The strength of ‘Jesus Among Other Gods’ is that it is succinct, well indexed and in parts, personal. Zacharias is thorough. Yet, his approach is simple. Jargon is clarified and not carried too far. What exists is an easy discussion on complex topics, close to the heart of someone who has a long history of experience sharing Christian faith and thought, in a mixture of sometimes hostile, cultural and ideological settings.

‘I  [at the age of 17, encountered Jesus Christ] amid the thunderous cries of a culture that has three hundred and thirty million deities.’[iv]

Zacharias makes well-informed assertions only someone raised in an Eastern culture can [v].  With that a unique challenge is placed before Western readers.

‘the concept of “many ways [to God]” was absorbed subliminally in my life as a youngster. I was conditioned into that way of thinking before I found out its smuggled prejudices. It took years to find out that the cry for openness is never what it purports to be. What the person means by saying, “You must be open to everything” is really, “You must be open to everything that I am open to, and anything that I disagree with, you must disagree with too.” Indian culture has that veneer of openness, but it is highly critical of anything that hints at a challenge to it. It is no accident that within that so-called tolerant culture was birthed the caste system. All-inclusive philosophies can only come at the cost of truth.’[vi]

If you’re looking for a strict fact-comparison dictionary of religions and Christianity, this isn’t it. If, on the other hand you’re looking for a good introduction, or to expand on the stark contrast between Jesus Christ and world religions, ‘Jesus Among Other Gods’ is a great place to start.

Zacharias, R. 2000 Jesus Among Other Gods: The Absolute Claims of The Christian Message,  Thomas Nelson

[i] Located in the introduction

[v] See page 27: ‘I made the assertion earlier that in the East, the home is the defining cultural indicator. Everything that determines who you are and what your future bodes is tied into your heritage and your social standing. Absolutely everything.’