Why Social Justice Warriors Are The Brethren of Iscariot, Not Christ

According to the Oxford Dictionary, a Social Justice Warrior is ‘a person who expresses or promotes socially progressive views.’

“A pejorative term for an individual who repeatedly and vehemently engages in arguments on social justice on the Internet, often in a shallow or not well-thought-out way, for the purpose of raising their own personal reputation. A social justice warrior, or SJW, does not necessarily strongly believe all that they say, or even care about the groups they are fighting on behalf of. They typically repeat points from whoever is the most popular blogger or commenter of the moment, hoping that they will “get SJ points” and become popular in return. They are very sure to adopt stances that are “correct” in their social circle.” [i]

In case you’re doubting the credibility of the Urban Dictionary, take as further evidence, examples highlighted by The Observer in an article called, ‘The Totalitarian Doctrine of Social Justice Warriors’.

“Since new “marginalised” identities can always emerge, no one can tell what currently acceptable words or ideas may be excommunicated tomorrow.”

I’m not in full support of every claim made by The Observer in that article, but the majority of it makes sense. It’s a poignant observation and it draws a line in the sand between S.J.W’s, their bulldozers, and those they’re told it’s trendy to hate.

The Observer points out the monstrous maelstroms of confusion that S.J.W’s create. 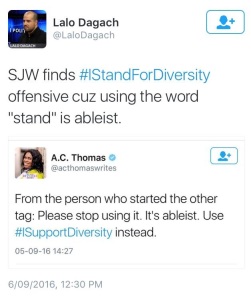 We get that S.J.W’s like to protest. Their right to protest is respected, but what it is that their protests are trying to achieve? What is the end goal? Who benefits? If asked the majority probably couldn’t give an adequate answer.

Take the S.J.W’s support for a war on the rich; their counter-productive boycott of business. Movements such as Occupy Wall Street and the anti-Israel, Boycott, Divestments and Sanctions (BDS).

Poverty is to be challenged and real injustices responsibly corrected, but how does boycotting businesses, just because they don’t line up in total ideological conformity with something like same-sex “marriage” fight poverty?  Putting people out of work because they hold an opposing view on these issues seems to only create poverty, not remedy it.

There seems to be confusion in what and how S.J.W’s protest. For example, they’re either against poverty or for same-sex “marriage”. In the end one will trump the other. As we’ve seen in well documented court cases, where Christian businesses have been sued for making a conscientious objection to same-sex “marriage”. It’s logical to conclude that putting people out of a legitimate business, in order to support same-sex “marriage”, means supporting poverty.

Take, for instance, the costly interference in the long standing business relationship between Coopers Beer, and The Australian Bible Society.  S.J.W’s protested that relationship, simply because of the position the Bible Society took on same-sex “marriage”. The precedent that event set is this: businesses can only be friends with those whom S.J.W’s approve of.

The manufactured industrial process of “boycott, hashtag, hashtag… people lose their jobs. Company shuts down. Capitalism is blamed [24hrs passes]. Next victim”. Is a radical cycle that only pads ego, wallet and blog stats. It’s not only narcissistic, it’s exactly what fascists do.

What real purpose does this manufactured “outrage” serve, other than to boost approval ratings, celebrity funding drives or ignite social media with a feel-good fifteen minute hashtag movement, that may live longer if (and that’s a big if) it s attractive enough to go viral?

Is the real concern of S.J.W’s, the marginalised, the minority and the poverty-stricken, or is it their own personal level of “social media influence”?

The militancy of all progressive ideologies are not about “…and justice-for-all.” They stand above, over and against us. They raise themselves to a sinless plain of existence. Sinners are those who’ve been accused of opposing, are being a threat to the prevailing ideology.

Militancy like this rejects original sin. There is no recollection of the equality spoken about by the Apostle Paul when he said, ”for all have sinned and fall short of the glory of God, and are justified by His grace as a gift, through the redemption that is in Christ Jesus.” (Romans 3:23-24).

S.J.W’s forget that there is only one who is sinless, and His name is Jesus Christ. They raise themselves to godlikeness, and operate from within a sphere of sinlessness, and by doing so they place Jesus under humanity, and raise themselves up as saviours of it.

From within this sphere the S.J.W can feel justified in calling for the punishment of those they deem sinful. Failing to comply is an act of treason or blasphemy. Such is the pressure applied to State, Church, business or community groups, who are forced to sign onto the S.J.W agenda without question.

S.J.W militants hand justice over to pseudo-politicians who judge from people’s courts, controlling popular opinion with image, idea, internet, and an index-finger pointed in judgement against blasphemers who speak out against idiotic statements, double standards and the toxic ‘isms which encourage them.

The S.J.W therefore tends not to ask ‘…what can they do for their country?” (John F. Kennedy). Instead they demand that their country do for them what their free country tries to empower them to do for themselves. The power of state and church is wielded in whatever direction the S.J.W commands it to go.

It’s reminiscent of the Soviet leadership who, in the early 1980’s, sort to remind Poland’s Communist leaders that any hint of counter-revolutionary blasphemy among Poland’s largely Christian population, should be suppressed:

(“Theses For Conversation With Representatives of the Polish Leadership“, 1980. Vladimir Bukovsky, 1995)

This was not affirmative action. It was bullying through fear, suspicion and threat. The type that coerced people to support the Nazis. It incites the same self-serving action as ‘Judas Iscariot, who went to the chief priests and said, “What will you give me if I deliver Jesus over to you?” Who in return paid him thirty pieces of silver. And from that moment sought an opportunity to betray him.’ (Matthew 26:14-15/ Mark 14:10-11/ Luke 22:3-6) [ii]

The same ‘Judas who protested, after seeing Mary take a pound  of expensive ointment , anointed the feet of Jesus and wiped his feet with her hair:

“Why was this ointment not sold for three hundred denarii and given to the poor?”, not because he cared about the poor, but because he was a thief, and having charge of the money-bag he used to help himself to what was put into it.’ (John 3:6)

The same Judas who, as the anti-Nazi theologian, Karl Barth wrote:

‘Perverted his office [of Apostle] into the exact opposite; placing Jesus under humanity, instead of humanity under Jesus – to deliver Jesus to sinners, not sinners to Jesus…Judas prepared for Jesus the fate of John the Baptist.’ [iii]

Because Iscariot thought that:

“Jesus was for sale.

He reserved to himself the right to decide for himself, in the face of Jesus, what the way of apostolic discipleship really involves.

It is an indication that his nature and function are those of the apostle who ultimately regrets his own devotion and the devotion of others to Jesus, who would prefer ultimately to use the power of this devotion for something which his own judgement considers to be better […]”

These statements form Barth’s critique of a people who, in their rejection of Christ, reject themselves; suffering a similar fate of self-destruction that consumed Judas:

‘The one who kills Jesus also kills themselves […]’ [v]

S.J.W’s, by placing Jesus under humanity, make Jesus a slave of ideology. There is no acknowledgement of His Kingship as LORD over all lords, the one who is and was, and is to come! In this way, the power of state and church is wielded in whatever direction the S.J.W commands it to go.

‘Neither man’s headship or humanity’s dominion (lordship) over the earth equals ownership of woman or creation. Humanity’s rule exists, as a gift. It exists in the light of God’s rule and therefore cannot be absolute.’ (Barth. [vi])

The Social Justice Warrior is in many ways the soldier for hire of the progressive ‘liberalist religion’, identified by Eric Voeglin in his 1968 work, Science, Politics & Religion. The Leftist ‘liberalist religion‘ preaches a gospel of ”self-salvation” through works-righteousness and blind allegiance to it’s sinless spheres.

The bloodshed of the 20th century shows that what lies behind this is pride. This coincides with the will-to-dominate, which is, today, masked by the veneer of social justice. This veneer hides the nature of its true intent.

Those who give in to pride, are determined to devour those who stand opposed to it. In this context, pride serves no one, and is guided by nothing, but its own lust for power. Its only interest in mercy, justice and love, is that which advances its own cause.

So goes the Social Justice Warrior and their banner: “peace, love and bureaucracy” [vii]. Preaching a confusing message between #loveislove and the more accurate, God is love.  Then moulding God’s throne of mercy and justice in their own image.

The late, political scientist, Jean Bethke Elshtain was on point when she stated that viewing Christianity As An Ethic Of Universal Niceness Misses The Point:

‘Misunderstandings of Christian teachings are rife. Christianity is not an exalted or mystical form of utilitarianism. Jesus preached no doctrine of universal benevolence. He showed anger and issued condemnations.

These dimensions of Christ’s life and words tend to be overlooked nowadays as Christians concentrate on God’s love rather than God’s justice. That love is sometimes reduced to a diffuse benignity that is then enjoined on believers.This kind of faith descends into sentimentalism fast.’ [vii]

As Paul the Apostle encouraged a young Timothy. Take heed, stand ready to answer with a loving “no”, those who would preach a different doctrine; a different Jesus Christ than the one the early Jewish Christians walked with, witnessed and spoke of:

‘If anyone teaches a different doctrine and does not agree with the sound words of our Lord Jesus Christ and the teaching that accords with godliness, he is puffed up with conceit and understands nothing.

He has an unhealthy craving for controversy and for quarrels about words, which produce envy, dissension, slander, evil suspicions, and constant friction among people who are depraved in mind and deprived of the truth, imagining that godliness is a means of gain.’

Jesus isn’t a Marxist rebel clad in olive drab. He isn’t a golden-haired, blue-eye, bearded, robe wearing guru, sitting on a cloud with rainbows coming out of His ears; sprinkling love dust, answering the lamp rubbing wishes of a group of “super-nice” people, who claim for themselves the moral high-ground [xx]*.

Any person who hands Jesus over to a corrupted, enslaving ideology; any person who chooses to measure Christian discipleship by allegiance to Leftism’s ‘liberalist religion’ , or any equivalent on the Right, are the brethren of Iscariot, not Christ.

[xx] J. Gresham Machen: ‘The prophets said, “Thus saith the Lord,” but Jesus said, “I say.” We have no mere prophet here, no mere humble exponent of the will of God[…]Jesus here represents Himself as seated on the judgement-seat of all the earth[…] Could anything be further removed than such a Jesus from the humble teacher of righteousness appealed to by [the cult of] modern liberalism?’ (Christianity & Liberalism)

*Charles Spurgeon: ‘some two faced men are hypocrites by nature; slippery as eels, and piebald like Squire Smoothey’s mate. Like a drunken man, they could not walk straight if they were to try…They are born of the breed of St. Judas. The double shuffle is their favourite game, and honesty their greatest hatred. Honey is on their tongues, but gall in their hearts.’ (The Complete John Ploughman, p.115) [added, 23rd November 2017]