On what is becoming an annual expedition, me, my family, and my wife’s parents gathered near their home to chase down the sometimes enigmatic and illuminant winged insect; the firefly.

For those with experience in such matters, it is probably pointless saying to you that these insects are difficult to photograph in the dark: 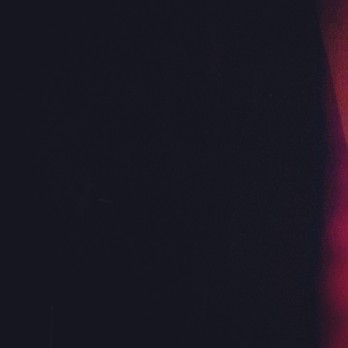 Source: RL2013 Fireflies in the dark

I know. So don’t call me out on this one 🙂 . I don’t see any fireflies in that picture either. They were there when I took the picture. I should have known. Despite lots of promise, my phone, like me, has limitations. Although for now I’ll put this down to a field exercise in exploring the strengths and limitations of using a Smartphone to document the night-time habits of the firefly.

I did however manage to take a photo of one. No it’s not dead; at least I don’t think so. His/her light is still shining so I’ll take that as a win-win for both me and the insect. It just happened to fall out of my hands after capturing it. 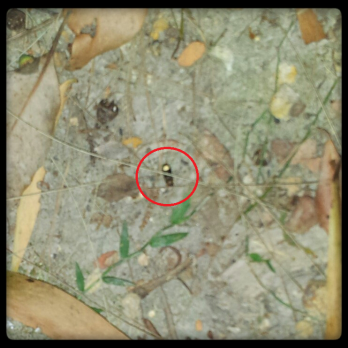 It is also worth pointing out the great thing about an excursion like this. It fits well within a home schooling paradigm. Upon reflection, this is a “science safari”  that inspires an interest in scientific discovery and takes joy in the diversity of creation. Throw in a well-lit camp fire, with marshmallows as a main course and hotdog spaghetti on the side, and you have one epic insect hunt through the forest, that despite some poor photography on my part, informed, educated and inspired. 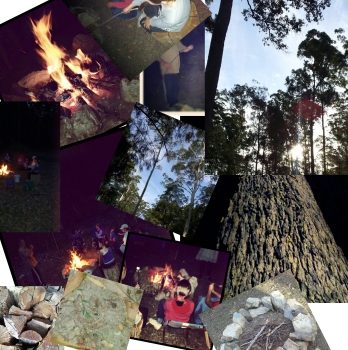 “Thus says the LORD who made the earth, the LORD who formed it to establish it—the LORD is his name: Call to me and I will answer you, and will tell you great and hidden things that you have not known’’ – (Jer.33:2-3, ESV)

Disclaimer: I am fairly certain, although I cannot be 100% sure, that despite the appearance to the contrary, no insect was injured during this event. If said insect was, I might plead that it gave its life not for our amusement, but for the betterment of scientific enquiry.

Some time ago we did some art theory, and then put it all together on paper. I had a general idea, and wanted to help my wife with home-school.

The theme I choose was ‘hands of praise’, which was drawn from  Neh.8:6.

‘And Ezra blessed the LORD, the great God, and all the people answered, “Amen, Amen,” lifting up their hands’ (ESV). 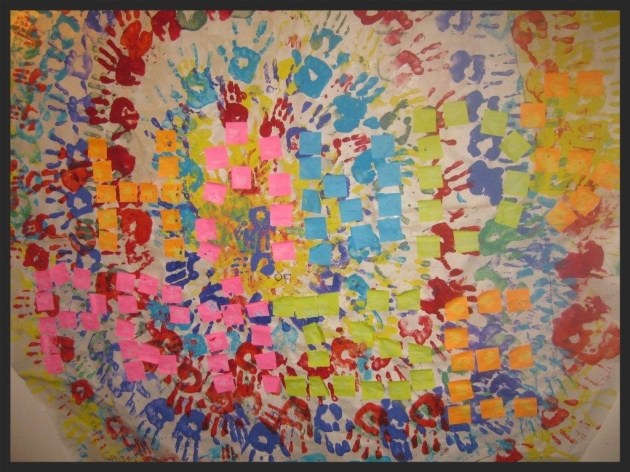 We used non-toxic acrylic  paint, post-it-notes and five sheets of butchers paper. We made circles with our hand prints, gradually moving from the outside in towards the centre. Once this was complete we used the post-it-notes to create the words hands & praise.

John Calvin wrote that ‘…..Thanksgiving, is the gratitude which ascribes to God the praise of all our blessings…..’ (‘Institutes’, II.8:392)…. 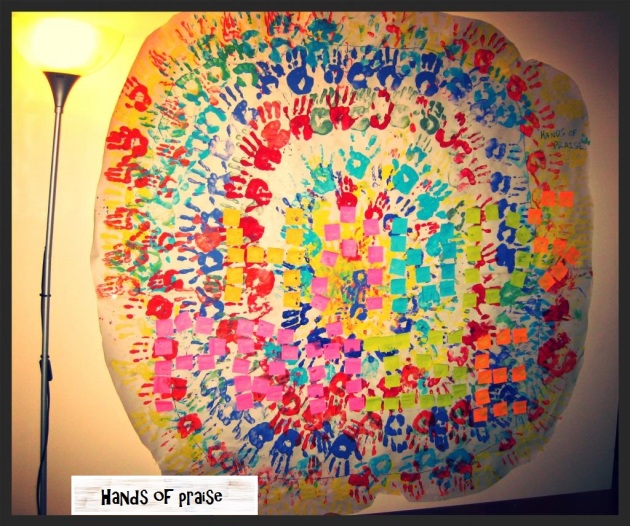 Making the most of the unexpected 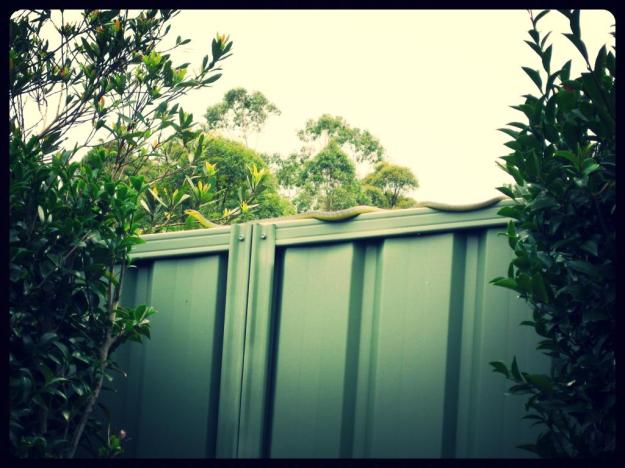 According to ‘Cronin’s Key Guide: Australian Reptiles and frogs, 2009’:

‘Australia is home to 760 species of reptiles and 200 frogs. Among them are some of the largest and most fearsome on earth’ (and…He’s not exaggerating)

According to another source: ‘some 100 Australian snakes are venomous, although only 12 are likely to inflict a wound that could kill you’. ( … and that from a Government website. ONLY 12!).

A few months back  we had an unexpected visitor, slither along the top of our fence. Needless to say, despite the excitement, we quickly and carefully identified it. As-you-do in Australia when any snake decides to make itself known in your proximity. The great thing about this event is that it became an impromptu Homeschool lesson. 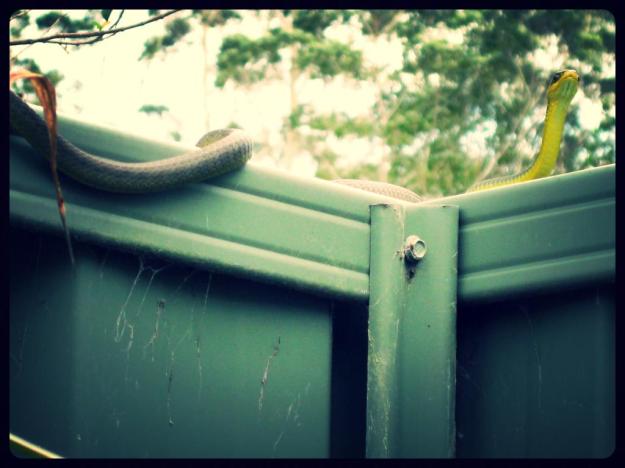 Identify the snake at a safe distance.

The ‘young fella’, in the pictures below, is a non-venomous, Green Tree snake. They ‘are active mainly during the day… eats frogs, some lizards, small mammals, stranded tadpoles and fish’ (Cronin, 2009:172)

When possible, try to make the most of the unexpected.

In this last picture you can just see his tail moving off the fence and into the tree. 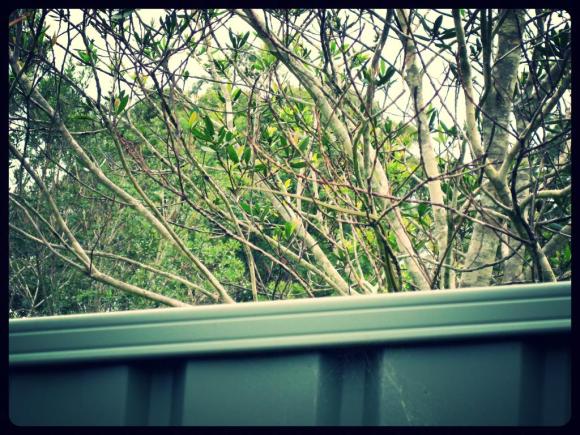 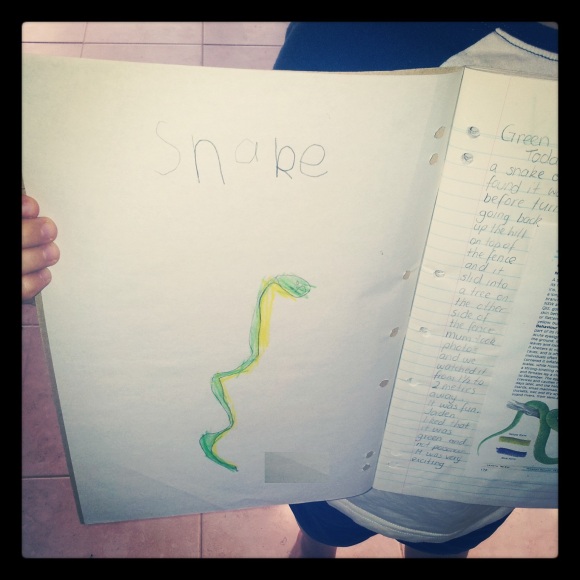 Like a sun shower, it certainly is something, when an awe inspiring, and very random event, pleasantly disrupts our routine.

God is a gift giver.