The Forthrightness of Bonhoeffer’s Relevance

In the process of studying, sometimes, amusing things happen. The quirky. The cool and the outright – “this has to be the part where Paul talks to us Christians about what it means to be Spirit lead, right?.”

The main two reads I’m working on at the moment are Karl Barth’s 1942, Church Dogmatics II:2: The Doctrine of God and Eberhard Bethge’s, ‘Dietrich Bonhoeffer: A Biography.’

On the side, I’ve just completed Bonhoeffer’s ‘Creation & Fall (DBW 3), which enhanced our homeschool journey through Genesis, and is, overall, an excellent and interesting resource. (Review/thoughts blog post pending)

In recent months, Sundays have become my reading day. It’s also always good when some much needed rain, helps push that study along.

I’d just gotten through reading a long stretch about Bonhoeffer’s pastoral work in London, 1933-1934. In this part of the chapter Bethge discusses Dietrich’s fervent quest to counter the compromises being signed into church governance by Nazi party favourites, who’d been slipped into governing positions within the church, such as the ”German Christians”, Reich Bishop Ludwig Müller. Bethge: ”Müller was the man most highly esteemed by the Party.’ (Bethge, p.348)

Inspired by Bonhoeffer’s own words and response, (which were considered too radical for a large majority in the opposition within the famous ‘Church struggle’ at the time), I remarked:

Then, about an hour later, after settling back down to read some more I came across this remark by Bethge:

Call it text-book fog, but I laughed at the “co-incidence.” One of the greatest, underrated characteristics about God is His sense of humour. 🙂

On a more serious note.

Here’s the difference between the approaches of Martin Niemöller and Bonhoeffer’s, Christian opposition to the imposition of new cultural laws in Germany during the 1930’s. Form the start Bonhoeffer was issuing a loving ”no.” Niemöller’s came much later on. Both paid a price for it. 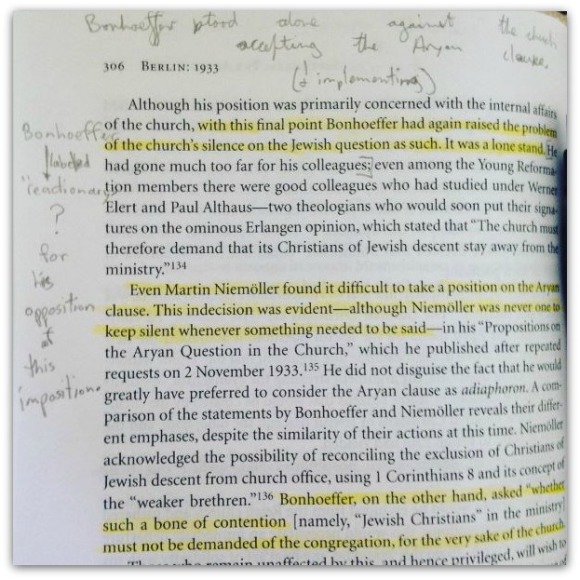 Bonhoeffer, at this early point in time had stood against, among other things, the church accepting and implementing the Aryan clause.

Sadly, although it hasn’t yet reached the same intensity for us. The imposition of new cultural laws on Western citizens is, today, beginning to happen on two opposing fronts: the placating of Islamists and the demonising of those in loving opposition to the advances of LGBT ideology.

In our own loving “no,” may we ‘do everything we can to keep things clear, courageous and untainted.’ (Bethge, p.337)