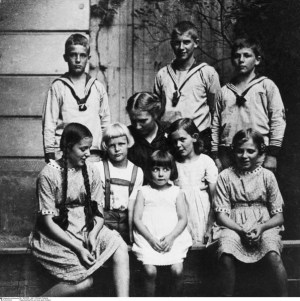 Two chapters in and I’m seeing the importance of Eberhard Bethge’s epic, ‘Dietrich Bonhoeffer: A Biography’.

Bethge begins by covering Dietrich’s family-history, education and home life. Each forms the background for his discussion on Bonhoeffer’s life as a student and his decision to study theology.

In these chapters, two things shine:

‘Bonhoeffer saw theology as branch of knowledge. His path to theology began – despite the Christian foundation of his parent’s home – in a secular atmosphere. Only later did the church enter his field of vision. Unlike theologians who came from families that were active in the church & theology. (p.44) [i]

Second: The Bonhoeffer children, including Dietrich, were, for a time, schooled at home.

Before moving to Berlin, Dietrich’s mother, Paula ‘gave the children their first schooling […]

She gave lessons at home to the older and younger children together, along with the children of some of her husband’s professor friends, and at the year’s end she was always able to register her pupils successfully for the state examination, where they did very well.

Thanks to the excellent start she gave them, they were able to skip entire grades and eventually take the school graduation examinations at a remarkably early age, as Dietrich did.

This home teaching, of course, implied some criticisms of traditional schooling. The Bonhoeffer’s did not want to hand their children over to others at an early, impressionable age. One of the family sayings was that Germans had their backs broken twice in the course of their lives: first at school, and then in their military service […]

Without the aid of textbooks, she taught them a large repertoire of poems, songs and games […]

Dishonesty and lies were severely punished; in comparison, broken windows and torn clothes hardly counted. Talents were encouraged at an early age. The Children knew it was not impossible for any of their real wished to be granted, and when others’ wishes came true they were expected to share in the pleasure. What their parents told them to do, had to be done without hesitation or argument, and complaining about work or unfair treatment was not tolerated. The Children’s day followed a disciplined pattern; they always knew where they were, and the routine never struck them as restrictive, for they also knew that their parents arranged happy surprises and outings every now and then.’ (pp.16-19)[ii]

Sabine, Dietrich’s twin sister, also wrote about their early home education. Sabine’s account described Paula as having had a ‘strong personality. Of being intelligent, warm-hearted and unaffected, a good organiser and socially very gifted.’

Sabine recounts that their large house even had a schoolroom with desks in it. Their mother ‘had a strong interest in and talent for teaching. Girls had a dolls room, to play as they liked, and the house also had a workshop for woodworking.’ Sabine then writes that ‘nobody took it amiss when they tore they clothes at play or work, or broke things.’ [iii]

On the difference between Bethge’s version and the more recent Eric Metaxas version, I still think Metaxas’ strength is that it meets a wider audience. It’s accessible at an affordable level.

Although my thoughts here could change the further I read, I still think, that the Metaxas biography holds its own; Metaxas makes the Bonhoeffer story more accessible. It’s easy to purchase, has a reasonable price-point and the retelling seems to flow better.

As I stated in a recent review of ‘No Ordinary Men,’ Metaxas may not augment the work of Eberhard Bethge, but he certainly doesn’t diminish it. Instead, what could be said, is Metaxas steers a larger audience in Bethge’s direction.