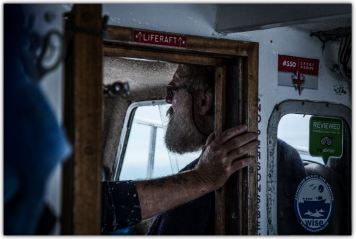 There are days when no matter how hard we try to realign our attitude, the overwhelming feelings we might encounter in our situation, become a flood that sinks us further into a feeling of pointlessness. We’re in too deep.

Days come and days go. We watch them pass by from sunrise to sunset. The pace of life smothers us. The things that we felt so qualified to do, no longer make us feel all that qualified.  Instead, we’re overcome by despondency, disillusionment and then despair. Almost breathless, all attempts to make sense of the place we find ourselves in fail.

Though people surround us, there is no one really near us. We hear the noise of those around us, but struggle to process the fact that when we speak, we only find ourselves contributing to that noise. From here we come to the point where we realise that no one can hear us because everyone is listening to the sound of their own voice, answering the applause or condemnation of the world that follows it.

Most are dealing with something, wrestling with their own fears, failures, excesses and successes.  Some give in and slip into a slow motion view of the world.  Faces and facts are distorted. The noise around them drops in pitch. Their world is turned from the sounds of bustling activity into a slow monotonous drone.  Some go faster, live harder, decide to medicate themselves and give their lives over to the consequences.

Surrendering their lives on the altar of human wisdom, both slide into oblivion. Trapped by the cave of their own existence, they refuse to hear any word spoken from beyond it. Creatures of habit, they lean on their own understanding and conclude that any such word is a lie. At best a figment of their imagination, at worst, a tool designed by others to control and deceive them. The word that penetrates the noise of the world around them is too strange, too much of a contradiction, too foreign for them to be comfortable in acknowledging it.

This word in its contradiction speaks of hope, of water in desolate places, of dry bones coming to life, of possibilities within impossibilities. This word contradicts their entire world. It is a word that challenges all human presuppositions about their situation. It is spoken and it speaks to the despondency, disillusionment, despair, and breathless uneasiness.

They’re in too deep, but this word throws to them a lifeline. Supported in the midst of their impending drift down into the abyss, they are confronted by its strange rescue. This word and its rescue exist despite what they were told and in contradiction to what they were sold. It makes no sense to them. It doesn’t look the way human wisdom says it should. It is an unexpected rescue.

This Word became flesh and dwelt among us[i].  He now becomes the contradiction to all of our impossibilities and the foundation[ii] for all our possibilities. The Word of the cross is the testimony of God, Jesus Christ and Him crucified. This is a word testified to, as God testifies about Himself through it.

‘but neither human resources, nor imperial munificence, nor appeasement of the gods, eliminated sinister suspicions that the fire [of Rome] had been instigated. To suppress this rumour, Nero fabricated scapegoats – and punished with every refinement the notoriously depraved Christians (as they were popularly called). Their originator , Christ, had been put to death in Tiberius’ reign by the governor of Judea, Pontius Pilatus. But despite this setback the deadly superstition had broken out afresh, not only in Judea (where the mischief started) but even in Rome.’ (Tacitus, Annals circa 116 A.D)

Committed to His Word, God dived in deep to throw us a lifeline. Days may come and days may go. We may watch them pass by from sunrise to sunset. The pace of life may smother us, but the Word of God stands forever.  The possibilities that come with this Word stand as a living, breathing, defiant contradiction to the threat of oblivion and any despair the threat of irrelevance might throw at us.

In light of this Word, we can stand firm against all that ‘assumes to itself authority, and does not allow itself to be regulated by the word of God, reckoning as nothing all the applause[iii]’, and condemnation of the world. This is because it’s ‘light shines in the darkness, and the darkness has not overcome it.’ (John 1:5, ESV)

Photo by Luke Besley on Unsplash

Chesterton: ‘Sometimes The Best Business of An Age is Resistance’

Sometimes the best business of an age is to resist some alien invasion; sometimes to preach practical self-control in a world too self-indulgent and diffused; sometimes to prevent the growth in the State of great new private enterprises that would poison or oppress it. Above all it may sometimes happen that the highest task of a thinking citizen may be do the exact opposite of the work which the Radicals had to do. It may be his highest duty to cling on to every scrap of the past that he can find, if he feels that the ground is giving way beneath him and sinking into mere savagery and forgetfulness of all human culture.’ [i]