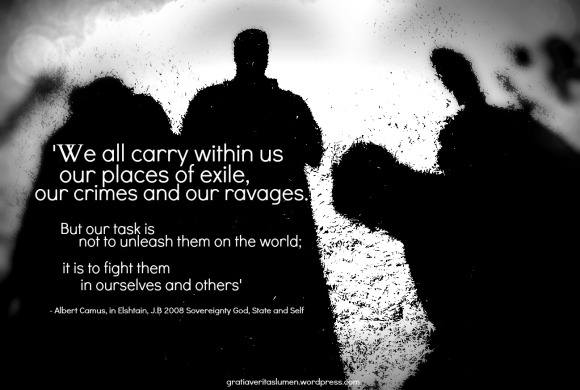 A post from last week quietly prepared the way for this review of P.D James’ novel ‘The Children of Men’ [link].

I finished reading it last night and have put pen to paper today in order to piece together some ruminations on the journey.

What I want to suggest is that ‘The Children of Men’ is a pre-emptive strike on the ideas of militant academia and certain elements therein which seek to aggressively engineer out the Judeo-Christian fabric of the civilization it upholds[i]. Unfortunately, to justify such a statement would require a much longer post and more time than I currently have at my disposable.

However, it would not be an overstatement if I asserted that James’ narrative clearly targets a certain trajectory within contemporary politics and society. I do not think it wrong, therefore, to propose that the book contains elements which make it a strong parable, relevant to our current context, that of post-modernity[ii].

A casual stroll back over some of my reading of the late Jean Bethke Elshtain, a feminist and expert in political science highlights both the political and social significance of the P.D James’ narrative.

‘Consider a world in which there are no more births, as does PD James who depicts a forlorn globe. No children have been born since 1995, and now it is 2021. People are despondent, chagrined, and violent. “Western science had been our god,” writes the protagonist (Theo Faron), who “shares the disillusionment” of one whose god has died. Now overtaken by “universal negativism,” the human race lurches toward its certain demise…Children’s playgrounds are dismantled. People disown commitments and responsibilities to, and for, one another except for whatever serves some immediate purpose – what I want – by contrast to anything that is given. People thought that they had eradicated evil, Faron notes, and all churches in the 1990s moved from a “theology of sin and redemption” to a sentimental humanism; special status for the generation last-to-be born, deportation to a penal colony for the criminals and euthanasia for the elderly become the order of the day. He notes, we are diminished, we humans, if we live without knowledge of the past and without hope for the future’[iii]

The narrative of ‘The Children of Men’ discusses the relevance of Christianity and Christians after an apocalyptic event. The theological, political and social importance of the narrative is found in the necessary mire of dialogue, back story, action/inaction, ambition and interconnectedness of her characters.

The Christian theological concepts of hope, repentance, wrongs being righted and of true liberty held in tension with true restraint; the paradox of freedom experience in a life surrendered to God, all reach far beyond the key concerns of a fading species. Humanity has tragically turned to the pursuit of ‘’comfort, security and pleasure’’[iv] over-against human rights, faith and democratic freedom.

This is the journey of neo-Christian martyrdom; pilgrims of the way wrestling with faith, doubt, relevance, opposition and sin. People of the way separated from the superstitious ritual of the institution, long given over to the cult of reason and its popular over-emphasis on comfort, security and pleasure.

Consequently, the polarity between Christian hope in the sovereign God and nihilistic[v] self-sovereignty holds the intensity of this novel together.

Without it there would be little suspense, zero motion and almost no depth to the complexity of connections encountered between the characters.

This novel, in form and content, is largely a story about Western society; in particular it is a deep story about authentic Christianity vs. a docile religion, empty, self-sovereign and heretical. A story of relationships and true ecclesiology seeded outside the church-visible, outside bumper stickers, celebrity preachers and pop evangelism.

Its attraction for me is the articulation of frail human existence, organic Christianity, and the consequences of totalitarianism; of hope, brokenness, redemption and restoration. Even though the meta-scene wasn’t believable, the underlying context is.

I acknowledge that this review is not holistic.

In order to fully engage with the text inside and out would require spoilers. Therefore, I have been deliberately ambiguous in certain ways because I recommend that most Christians aim to read it for themselves.

Though any simple summary is difficult, if I had to summarise ‘The Children of Men’ in a sentence I would write: Like the crowd, and the persistence of the two blind men in Matthew 20:29, the journey from helplessness to hopefulness begins at the feet of Jesus.

[i] (or more properly the Holy Spirit breathing through Judeo-Christianity; see Jer.31:31-32)
[ii] This is confirmed by Jean Bethke Elshtain’s defence of the text as a useful window into what could be, even though “we are not there yet’’.
[iii] Elshtain, J.B 2008 Sovereignty God, State and Self Basic Books p.226 see also  Elshtain, J.B 2000 Who are We? Wm.B Eerdmans Publishing pp.122-123
[iv] I think “Maslow’s Hierarchy of needs” played a big part in grounding the reader into the mindset of the characters in the text. These are aspects of society presented appear to be subtly reinforced by P.D James to ensure the readers ability to fully connect with the context, circumstances and psychology of her key characters.
[v] I recommend Elshtain’s discussion in her book Sovereignty, chapter 11

One response to Revisited: P.D James, The Children of Men