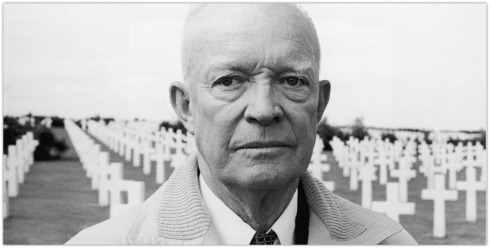 Eisenhower’s ‘Crusade in Europe’, is one of the best primary texts I’ve read.

This isn’t a book frozen in time. Neither is it a book written by a Victor for victors. At the close of the war in Europe, Eisenhower commanded the greatest military coalition ever assembled. Yet, the book is void of conceit or concern for self-promotion.

Eisenhower doesn’t wear his faith on his sleeve. There’s little to no mention of God and only one mention of prayer. However, this shouldn’t be easily read into. Billy Graham, in his autobiography devotes an entire chapter to Eisenhower, where Graham speaks highly of a man of integrity and honour, disillusioned with the church, but not with God.[i] Concluding that, ‘Dwight was one of the great men in our history, and it was a privilege to know him.’[ii]

Eisenhower was a servant-leader. Two prime events mark this. First, his deliberate late entry into a liberated Paris and his absence from conquered Berlin.

Paris: ‘Immediately after the capture of Paris, I notified General de Gaulle that I hoped he would quickly enter the capital; I desired that he, as the symbol of French resistance, should make an entrance before I had to go in or through it.’

Berlin: ‘The Western Allies were invited and expected to participate in the signing at Berlin, but I felt it inappropriate for me personally to go. The Germans had already appeared in the Allied Headquarters to accomplish their unconditional surrender and I thought the ratification in Berlin should be a Soviet affair.’[iii]

More often what is encountered is self-appraisal. Whilst still formal, it’s difficult to not picture a camp fire, a mild summer evening, foldout chairs and Eisenhower casually telling of his participation and role as liberator, in such a great and tragic saga.

There is only one brief mention about any run for the U.S presidency. This occurs in a conversation initiated by Truman during an official visit to Europe. In 1945, the idea of a post-war run for president is far from Eisenhower’s mind. As Graham noted in 1951-52, ‘Eisenhower had been telling both parties for years that he was not interested.’ [iv]

Carefully and chronologically, Eisenhower maps out the events which took him from solider to the leader of SHAEF: Supreme Headquarters Allied Expeditionary Force.

In much of Crusade in Europe, Eisenhower’s views are balanced. The only strong sign of emotional sway, rightly, comes when he briefly talks about the “horror camps.” Understandably, June 6th (D.Day) and the details of events following it is a major feature. From here Eisenhower moves through to Paris and concludes with the “providential” crossing of the Rhine at Remagen, which signalled the inevitable defeat of the Nazis. Since Remagen allowed the Allies to establish and reinforce a bridgehead in Germany.

Throughout the chapters following D-Day Eisenhower gets more and more political. This is possibly due to frustration with red tape, the forced necessity of political correctness (largely the need for sensitivity towards Soviet procedures and communist culture) and the Churchill’s push to get into Berlin before the USSR.

There’s an in-depth and optimistic reflection on dealing with the Soviets that ends with both a lament at what could have been, and a warning of what was to come.

‘We who saw Europe liberated know that the Communistic fear that men will cling to freedom is well founded. It is possible that this truth may be the reason for what appears to be an aggressive intent on the part of the Communists to tear down all governmental structures based upon individual freedom. If the men and women of America face this issue as squarely and bravely as their soldiers faced the terrors of battle in World War II, we would have no fear of the outcome.

If they will unite themselves as firmly as they did when they provided, with their Allies in Europe, the mightiest fighting force of all time, there is no temporal power that can dare challenge them. If they can retain the moral integrity, the clarity of comprehension, and the readiness to sacrifice that finally crushed the Axis, then the free world will live and prosper, and all peoples, eventually, will reach a level of culture, contentment, and security that has never before been achieved.’[v]

Although he maintained good relationships with politicians, he doesn’t appear interested in politics until politics interferes with operational commands. This is usually only when that interference is detrimental to, agreed upon strategies, already in effect.

One of these included the issue of race:

‘…minor difficulties between Negro [African-American] troops and other soldiers, or civilians. These incidents frequently involved social contacts between our [African-American] soldiers and British girls. The British population, except in large cities and among wealthy classes, lacks the racial consciousness which is so strong in the United States. The small-town British girl would go to a movie or dance with an [African-American] quite as readily as she would with anyone else, a practice that our white soldiers could not understand.

Brawls often resulted and our white soldiers were further bewildered when they found that the British press took a firm stand on the side of the [African America]. When I learned at the press conference that stories of this kind were on the censored list I at once revoked the order and told the pressmen to write as they pleased— urging them only not to lose their perspective.’[vi]

In addition, Eisenhower makes a frustrated note of the highly centralised structure of the British High Command. In contrast to the American structure, where commanders were entrusted to act in the best interests of the cause on their own steam, Commonwealth Forces had to report back to their respective high commands in England  before acting. In other words, the command structure on the ground was ultimately approved by commanders not actually on the ground.

This becomes a significant reason for the American insistence on having one overall field commander. Hence, the position of Supreme Commander that Eisenhower eventually held.

One of the most interesting issues discussed is Eisenhower’s dealings with the conditional support of the free French. For example: Free French demands to establish a Free French Government in its colonies in North Africa, organising a French army, and then later working with a newly liberated, yet politically divided France.

‘It was easy to oversimplify the French problem as it then existed. Only patience and persistence could bring us valuable and, eventually, democratic allies […] the difficulty was the attitude of the French Army, whose assistance we badly needed […]The plan of my political advisers and myself was to promote an eventual union between the local French administration [in North Africa] and the De Gaulle forces in London.’[vii]

Eisenhower pours out praises on the final contribution of Free French forces. However, he is not uncritical of how unsteady the French contingent was. 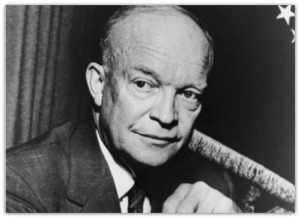 He doesn’t go as far to say they were unreliable, but does mention specific occasions when he had reason to be concerned about the potential negative effects the newly formed French contribution might have on the allied front line, which now extended from Belgium to the Swiss Alps.

Apart from some small sections where the Eisenhower gets a little bogged down in numbers and statistics, there is nothing stale about the text. Carefully chosen phrases, criticisms and praises, all show that Eisenhower was very aware of his readers. Having studied the German side, including diaries, sermons and letters, I’m yet to find anything as unique as this from the Americans.

The priceless quality of ‘Crusade in Europe’ is only enhanced by the many lessons that can be drawn from Eisenhower’s faith, life and leadership.

Among the examples already cited to back this statement up is Eisenhower’s admonishment of those in the West, who would manufacture outrage for personal gain:

‘As usual, individuals with no responsibility in the matter, their humanitarian impulses outraged by conditions that were frequently beyond help, began carrying to America tales of indifference, negligence, and callousness on the part of the troops. Generally these stories were lies. The thousands of men assigned to the job of rescuing the DPs and organizing relief for them were Americans.

They were given every facility and assistance the Army could provide, and they were genuinely concerned in doing their utmost for these unfortunate of the earth. But because perfection could not be achieved some so-called investigators saw a golden chance for personal publicity. They did so at the expense of great numbers of Americans who laboured night and day to alleviate the average lot of people who had suffered so much that they seemed at times beyond suffering.’[viii]

Eisenhower, by his very example, speaks volumes about what kind of man he was and who he ultimately served. He didn’t need to promote it. In terms of primary resources and political relevance, ‘Crusade in Europe’ is invaluable.

To echo John Stott’s call in regards to the Bible [ix], ‘Crusade in Europe’ belongs in the marketplace, not the museum.