“Remember Who The Real Enemy Is”

“Everyone’s going through a refining fire sooner or later, but you’ll be well-preserved, protected from the eternal flames. Be preservatives yourselves. Preserve the peace.”

Last night my wife and I rented the second movie in ‘The Hunger Games’ series: ‘Catching Fire’.

Along with the James. N. Howard soundtrack, the comic relief of Woody Harrelson, 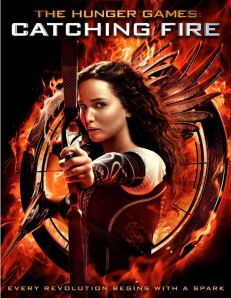 Jennifer Lawrence’s precision acting and the action sequences.There was a lot to like.

For those unfamiliar with the story:

Katniss Everdeen is the protagonist; a disciplined hunter wrestling with the contrasts between a world of poverty and oppression, and the world of the Capitol with its opulence, Epicureanism, control and wealth.

Her battle deteriorates into a personal struggle to come to terms with the brutality of her situation and the hostile environment she finds herself thrust into. One she also hurls herself into it by taking the place of “Prim’’, her sister, who is “reaped” for a reality TV show, designed to control with fear, shame.

Among the terms given to Katniss such as “girl on fire”, we also find in her narrative the themes of martyrdom, discipline, community, family, self-sacrifice, integrity, higher purpose and hope.

There even rests an imperative given to Katniss before entering the arena for the second time to, “remember who the real enemy is.”

All of which are intrinsically theological.

Right away we can see, reflected in ‘The Hunger Games’, Jesus’ statement: ‘’greater love has no one than to lay down their life for another”.

However, it is the subtle and consistent focus on discipline that should catch our attention.

Working through some daily readings today I couldn’t help but reflect on ‘The Hunger Games’ and its relevance to what I was reading.

Landing on some material from Charles Spurgeon I found his connection between grace, salt and fire. Expanding on Mark 9:49 and the synoptic equivalents he refers to salt as a ‘grateful emblem of divine Grace in the soul.’[ii]

Despite the lack of sleep (having also watched Ben Stiller’s: ‘The secret life of Walter Mitty’ – a little slow, but well worth your rental dollars) I saw the themes melt together in answer to my questions about the Mark 9:49 reference and its relevance.

‘For everyone will be salted with fire’

Some things in the economy of grace are measured; for instance our vinegar and gall are given us with such exactness that we never have a single drop too much, but of the salt of grace no stint is made[1]

Unlike an eternal fire (hell), which is the context of Jesus’ discourse, a “trial by fire” is a measured purifying.  Think here of the parent who, with a “no”, by hiding the sugar, yet says “yes” by not hiding the salt.

Parents need to lock up the fruit cupboard, and the sweet jars, but there is no need to keep the salt-box under lock and key, for few children will eat too greedily from that. A man may have too much money, or too much honour, but he cannot have too much grace (Spurgeon) [iii]

If we view God’s grace as being like salt and fire, it is highly unlikely we would want to abuse it. E.g.: The parent’s “yes” to salt it is not likely to be abused. This logic starts to feed into questions about discipline, costly grace and cheap grace. Mercy and Judgement; Grace and Law.

Suffice to say that, in the refining fire of struggle the call to “remember who the real enemy is” can be found. Not to far from this is the true Evangels who call from both past and present telling us that rescue is real.

They may seem like unlikely conversation partners, yet put together, the parallels between Katness’s story, Spurgeon’s insight and the biblical witness become clear.

In the midst of the fire, those who are called to be salt are encouraged to “remember who the real enemy is.”

I think its fair to say that ‘The Hunger Games’ remind us that the salt of grace is a purifying force inside the fire of trials.

In the fictional world of ‘The Hunger Games’ Katniss is salt to all that leeches, fire fuelling the cause of hope. A hope of peace and true freedom embodied in the symbol of a “mockingjay” bird.

For this world, Jesus is.

He does this through His presence in the Holy Spirit and the proclamation of the Evangels, who empowered by grace “remind us about who the real enemy is” and where our true help comes from.

[i] Peterson, E. H. (2005). The Message: The Bible in contemporary language (Mk 9:49–50). Colorado Springs, CO: NavPress.
[ii] Spurgeon, C. H. (2006). Morning and evening: Daily readings (Complete and unabridged; New modern edition.). Peabody, MA: Hendrickson Publishers.
[iii] ibid
[iv] Spurgeon uses the term ‘reptiles’. I have changed this to leeches in order to be more in line with the science. Doing so, in my opinion, does not reduce the veracity Spurgeon was trying to convey by using such a simile. If anything changing the word reinforces his point, while also neutralising any potential criticism about the apparent scientific inaccuracies present.