God’s Grace, Jules Verne & The World That Revolves On The In-Between

Despite what might be a popular conception for those of us, raised in, by, and with pop-culture, author, Jules Verne (1828-1905) was neither American nor British.

He wasn’t a curious atheist or even a fierce agnostic. Not that being an atheist or agnostic disqualifies anyone from having anything of value to say.

It’s just worth noting that there is a distinction between the man and any perpetuated assumptions that deconstructionism, selectively-applied-to-support-an-agenda might create. (Through, say, it’s presumed, superior grasp of authorial intent?)

By which, I mean, the inadvertent creation of a long-winded meaning, in order to explain a meaning, but which ends up having nothing to do with the author’s actual, original and intended meaning.[i]

Verne was, according to common belief, a deist.  An unorthodox Christian belief that became popular in the 17th, 18th and 19th Centuries.

Evidenced by the concept that, ‘God helps those who first help themselves’.[ii]

Or as is understood by our Muslim neighbours in the Quran as,

‘Indeed, Allah will not change the condition of a people until they change what is in themselves.’[iii]

‘a movement of rationalistic thought that acquires knowledge of God solely by the use of reason as opposed to knowledge gained through revelation (God’s making himself known; Jesus Christ) or church teaching.’[iv]

With some amount of caution about oversimplifying deism, it is, in a sentence, Christianity without Christ. It has little to nothing to do with grace, gospel or the relationship, Father, Son and Holy Spirit, has chosen to establish, rescue and then secure, with humanity.

The five points of deism are:

It could be argued that deism is syncretism, landing somewhere in the middle of Christianity, Judaism and Islam. Their similarities fused together in a way that allows for the possibility of an absolute reason-in-unison between the three. Not quite universalism.

It’s easy to see why deism was attractive. It advocates an easy tolerance.  Appearing to be justified by reason it’s seen as a useful tool for mediation, one that ignores differences. Conveniently, God’s relationship with us is reduced to a utilitarian, religious checklist that is then imposed back onto Him. 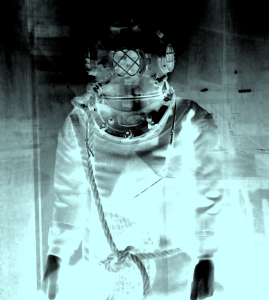 in the uniqueness of Christ is displaced. He is reassigned to the role of under-Lord who exists to meet the desires, wants, progressive goals and universal happiness of His human-overlords.

The outcome being totalised subservient coexistence.

Held out at a distance God is detached. His transcendence over-emphasised, He is thought to be unmoved until we choose to move.

Consequently, God’s free act in Christ is stolen. Like the prodigal son’s father, God’s decision to move before we do is overlooked. His reach and run towards us rejected as foolish, embarrassing and undignified.

Driven by hypocritical intolerance, this empowers a push towards the slow annihilation of the Christian. God is enslaved, Christ subsumed. In its place is established the quintessential, dysfunctional kingdom of man or woman. The unexpected result being the embodiment of terror; power held in place by the tyranny of suspicion and the misuse of appearances to manipulate reality in order to maintain such power.

In truth this easy tolerance is a ruse. At best it’s only an uneasy truce between those in the West who seek to displace Christianity and elements of fascist ideology that, in part, still marches on through the desert sands of the Middle East and the halls of Western academia.

As for Verne, perhaps his later works are an enquiry into this. Perhaps they are a judgement on humanity about what can happen when progressive optimism turns into human arrogance.

The caution and detail within Verne’s tales show that he was a keen observer, not a prophet. His words are a reminder to the over-confident, self-assured and tenured wise.

Not a lot of accessible contemporary debate[vi] appears to exist about how much his theism was influenced by deism, and how heavily or not, deism or theism might have influenced his work.

Most commentators seem to settle comfortably on the point that Verne rarely mentions Jesus Christ, so his deism is considered unquestionable.

On the surface they appear right. However, doubt about their conclusions is justified. For example: Verne had apparent fascination with Mormonism.[vii]

In the relatively unknown, 1871, publication ‘A Floating City’, Verne, in response to the sails of the Great Eastern being drawn out of respect for a Sunday Church service at sea, writes:

‘I thought myself very fortunate that the screw-propeller was allowed to continue its work, and when I inquired of a fierce Puritan the reason for this tolerance, “Sir,” said he to me, “that which comes directly from God must be respected; the wind is in His hand, the steam is in the power of man.” I was willing to content myself with this reason, and in the meantime observed what was going on, on board.’[viii]

In addition, certain parts of ‘A Floating City’, ‘Twenty Thousand Leagues Under the Sea’ and ‘Around the World in Eighty days’ provide us with evidence of Verne’s respect for traditional Christian devotion, it’s place in society mixed with a healthy criticism of the church-as-institution.

For now, outside quick token mentions of deism, those details are left to trivia and the footnotes of historians.

Yet, without real enquiry, or interest in it, any debate about Verne’s faith and theology will remain locked in speculation.Relegated to the rubric of opinion. Any conclusions will remain quietly hidden within the realms of mysticism, steampunk fashion, and the realm of science-fiction, a category that Verne is too easily assigned.

“Static objects mustn’t be confused with dynamic ones, or we’ll be open to serious error.” – Captain Nemo [ix]

[i] Wordy, I know, but…it makes sense when you think about it.

[ii]  A quote often attributed to Benjamin Franklin, this is, however, more than likely a proverb which originated in Classical Greece.

[vi] It’s difficult to find any.

[vii] Verne mentions it with an air of fascination in both A Floating City, and Around the World in Eighty Days.

5 responses to God’s Grace, Jules Verne & The World That Revolves On The In-Between