Barth & Scruton: Where God’s Revelation Meets The West & All The Rest 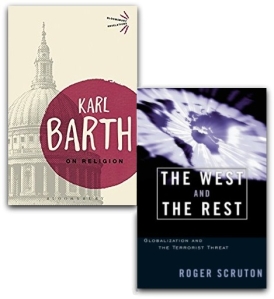 Karl Barth and Roger Scruton make unlikely conversation partners. Barth, was a Reformed Swiss theologian, who held up the distinction between theology and philosophy, and Scruton, is a British philosopher, talks theology, but knows his limits on the subject.

The meeting between the two takes place in Barth’s On Religion and Scruton’s, The West and All the Rest. Together they provide a telescopic view of modern religio-politics and the socio-political landscape of contemporary Western society.

One big theme for Scruton is the relationship between the ‘social contract’ and Creed communities[i] (or communities bound by religious law). One clear example of a Creedal Community is a community living under Shari’a law.

Shari’a is held up by the Muslim community as unchangeable divine law. ‘The gate of itijiahd is closed’, meaning that the divine law, the Shari’a, can no longer be adjusted or added to, but merely studied for meaning that it already contains.’ [ii]

Within Islam, salvation comes through the law. Routine obedience to both ritual and law ‘makes and unmakes a Muslim’s relationship with God.’ [iii] Islamic ‘communities are not formed by doctrine, but by obedience, established through ritual and law’. [iv] There is no objective, separate political body, such as the separation of the Church and State.

‘like the Communist Party in its Leninist construction, Islam aims to control the state without being a subject of the state […] Islamic jurisprudence does not recognise secular, still less territorial, jurisdiction as a genuine source of law. [v]

This is unlike what is found in Western Civilisation. The foundations of which were laid by Judeo-Christian doctrine and Roman law, where ‘law is defined over territory [territorial jurisdiction]’. Jesus’, “render to Caesar what is Caesar’s, to God what is God’s” (Mt.22:21). From the two, emerged the so-called “social contract”. This consists of the rights and responsibilities of free citizens, lived out, and governed within the boundaries of classical enlightenment liberalism and its ‘’culture of toleration’’.

Scruton explains that even though in the Western sphere, ‘religion is the concern of family and society, not of the State’ [vi], the “social contract” between both Church and State, has an undeniable foundation in the Judeo-Christian experience, which advocates the love for God and love for neighbour, whether that neighbour be a Jew, Christian, Muslim or neither. Neighbour serves neighbour, just as that neighbour would serve himself (Leviticus 19:9-18, Deuteronomy 6 & Matthew 22:39, Mark 12:31).

This implies personal responsibility, which functions under the covering of this basic agreement. An agreement that works for social and political cohesion; a ‘common loyalty to a single [secular] political culture’ [vii], within in an ethnically diverse, vibrant and free society.

Rather than within a coercive society, or politik, that is grounded in allegiance to one overarching ruler, party or carefully structured narrative – theocratic mythology.

In other words, the “social contract” exists within a house where freedom is governed responsibly; it cannot exist in a house of slavery, where freedom is squashed by opposing extremes such as Islamism,  Nihilism, subjective relativism,  or communist/Marxist doctrine.

Barth’s major theme meets Scruton’s precisely where Barth asserts that religion, when it’s abstracted from God’s revelation in Jesus Christ, becomes idolatrous and toxic.*  E.g.: Works righteousness; where the focus is not on what God has done, but on what man and woman do, and how they can supposedly reach God, without God.

Scruton and Barth, both present a tangible argument for the importance of recognising the dangers of severing the “social contract” from the Judeo-Christian experience.To do so, is to lose its unique critique and affirmation.

Responsible freedom and civics (the “social contract”)  facilitate true freedom, because it understands that true freedom only exists when just limitations, are applied to protect freedom from the challenges which threaten its existence.

Such as post-enlightenment nihilism (manifested as militant secular humanism), cultural Marxism, Islamism and radical feminism, all of which, through revisionism and deconstruction theory, seek to sever society from tried and true, Judeo-Christian doctrine and experience, without regard for the anchoring of true freedom that it provides.

For Barth, men and women act against God’s grace (His unmerited salvation). In man and woman’s quest to reach God, on human terms, his and her ‘erecting of towers of babel’, are faithless acts, built on flawed and faithless human arrangements.

These human arrangements are absent of any involvement or acknowledgement of or faith in the Divine. Barth points out that, as history proves, when one religion fades or is usurped, another inevitably takes its place.

Scruton appears to agree, stating that both Marxism and Feminism, share the ‘ambitions of a monotheistic faith [religion]’

‘It seeks to replace or rearrange the core experience of social membership and therefore has the ambitions of a monotheistic faith, [like Marxism] offering a feminist answer to every moral and social question…a feminist [and Marxist] [account of history], theory of the universe, and even a feminist goddess. It drives the heretics and half-believers from its ranks with a zeal that is the other side of the warmth with which it welcomes the submissive and orthodox.’  [viii]

‘…we should acknowledge that the worst forms of nationalism and socialism arise when their adherents look to them to provide the equivalent of a religious faith. –  an absolute submission that will sweep away all doubt, demand total sacrifice and offer redemption in exchange. This is what the latter-day Marxists are demanding.’ [xix]

This goal is also evidenced in the remarks of, György Lukács, one of the founders of “Western Marxism”, in Record of a Life:

“You cannot just sample Marxism […] you must be converted to it.” [x]

Scruton and Barth share a common protest. Connected to Barth’s discussion on religion without revelation, Scruton helps build a strong theological critique of Islamism, Marxism and Feminism. All of which exist as religions without the revelation of God in Jesus Christ.

Just as religion without the revelation of God in Jesus Christ, is bound for destruction, so is Western political philosophy that jettisons its Judeo-Christian foundations; foundations that hold up a moral and faith basis for Classical Liberal enlightenment principles, such as the largely successful independent working relationship between Church and State.

In Islam there is no equivalent to a separation between Church and State. Like Marxism, the State is the Church (or Mosque). All moral opposition is treated as treason. (Exemplified by ex-Muslim & secular humanist, Ayaan Hirsi Ali in her book, ‘Infidel’ and Alexander Solzhenitsyn, in his 1971, Harvard address).

As neighbour betrays neighbour, family member betrays family member, all politically incorrect discussion or dissent [talk not approved by the State] is reported to organisations like the Morality Police (Gasht-e Ershad) or the Soviet Cheka, The Soviet Union’s equivalent to the Gestapo[xi].

Scruton makes it clear that, what is at work behind the scenes, in the West, is not a denial of religion, but a quest to replace it. Barth makes it clear that any religion completely absent or synthetically veiled with lip service to God’s revelation in Jesus Christ, is one to be resisted.

Like Barth’s admonishment of natural theology during the rise of Hitlerism and the Third Reich. Like his warnings of how faithlessness leads humanity towards inhumanity. Like Barth’s meticulous warnings of any religion which exists without the sublimating [raising to a higher status] of religion through the revelation of Jesus Christ [God’s unmerited salvation – grace], Scruton points a telescope towards a storm that’s been darkening the horizon, but has been dangerously dismissed, by far too many for far too long.

[i] This term is attributed to Oswald Spengler, The Decline of The West.

[xix] Scuton, R. 2014 How to Be a Conservative: The Truth in Socialism, Bloomsbury Publishing (p.64)

[xi] Another example comes from Alain Besancon, who wrote: ‘Muslim states, according to strict adherence to law, cannot authorize the reciprocal tolerance asked of them by Christian states. In calling for this, Christians show their ignorance of Islam.’ (Forward to Jacques Ellul’s, Islam and Judeo-Christianity).

*(Such as: any religion [claim to the way of salvation] that holds a veneer of revelation, but ultimately rejects both covenant and Jesus Christ as the promise and fulfillment of God’s revelation; God’s free choosing and acting in and through the covenant of grace.)