Whether Hamlet is referenced, like it is in the underrated Danny DeVito movie ‘Renaissance Man’ (Army Intelligence) [i], or played word for word in theatre-to-DVD productions , I am a curious fan.

Next to Hamlet, the greatest lessons we learn within this play come from Polonius, the well schooled political advisor[ii].

Polonius’ platitudes and actions provide insight rather than just entertainment.With Polonius, Shakespeare rolls out the inevitable decline to any castle made of sand or well hatched plan for revenge.

His monologues appear within a set of dialogues. Lines that don’t fall within the range of the soliloquies assigned to Hamlet. They are different, unique and deep.When reading the play, it’s easy enough to mistake a form of reminiscing for remorse.

His words reflect a sense of sentimentalism. Carried forth on a quiet retrospection that gives voice to an understanding of interpersonal relationships. Wisdom accumulated over the years in his role as a devoted father, loyal diplomat and crafty politician.

Some examples of this are expressed in Polonius’ address to his son Laertes, and later to his daughter Ophelia:

‘See thou character. Give your thoughts no tongue,
Nor any unproportion’d thought his act. Be familiar, but by no means vulgar…
Do not dull thy palm with entertainment of each new-hatcht, unfledged comrade’
(Translation: steer clear of people pleasing for the sake of acceptance, not duty)
Beware of entrance to a quarrel…Give every man thine ear, but few thy voice.
Costly thy habit as they wallet can buy, but not expressed in fancy; rich, not gaudy;
For the apparel often proclaims the man.
Neither a borrower nor a lender be: for loan often loses both itself and friend.
This above all, to thine own self be true;…Thou canst be false to any man.’

‘It seems it as proper to our age, to cast beyond ourselves in our opinions,
As it is common for the younger sort to lack discretion.’

Polonius to Ophelia in front of the King:

‘Tis too much proved, that with devotions visage and pious action we do sugar coat over the devil himself’

There is a lot that can be mined from Polonius’ role in the play. He has been corrupted. It is this mixture of light and dark; truth, half-truth and outright lie, all the result of activities which affect the storyline.

Although he is outsmarted by Hamlet (who manages to convince a suspicious Polonius’ of his supposed madness), the affable Polonius navigates the whimsical nobility face to face. He is a confident man.  Speaking what is necessary rather than what is needed.

Polonius comes across as a man who doesn’t care about the difference between what he knows to be true and the lie he is upholding in order to maintain the status quo. Serving both the King, Queen and his own self-preservation.

There is a moment of irony which seems to suggest that Polonius has unknowingly predicted the path his downfall will take:

{Hamlet} – What did you enact?
{Polonius} – I did enact Julius Caesar; I was kill’d in’ the Capitol; Brutus killed me.

Not long after this, rattled by confirmation of the conspiracy, Hamlet comes to confront his mother. Polonius, hiding behind a curtain in the Queen’s bedroom is then ‘slain’ (in self-defence?) by Hamlet.

Imaged by Polonius hiding behind an ‘arras’ {tapestry that divides rooms}.The scene plays on the deception which Polonius has been part of. Hiding behind the truth, his veiled participation in the great deception is unveiled. Polonius is silenced.

From this point on, the sand from which the castle  has been made begins to rapidly erode.

Hamlet’s objective in uncovering their deception by using it against them is only partly achieved. Revenge and cunning culminating in the tragic end of all major players excluding that of Hamlet’s close friend Horatio.

Is there a theological point?

Yes. Polonius is no martyr. What is seen on the surface is a veil of innocence, a hard-working loyalty; a wise, tolerant and considerate person. By all appearances a devout and pious man.

‘I hold my duty, as I hold my soul. Both to my God and to my gracious king’

In Polonius, Shakespeare reasons us with a warning:

‘Tis too much proved, that with devotions visage and pious action we do sugar coat over the devil himself’ 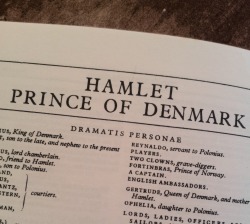 The point is that only a false grace sugar coats reality.

Instead the Christian understands that true grace testifies to a cost.

The existence of ‘judgement – the shadow side of the Gospel’. Justice hand in hand with the ‘lighter side of mercy’; where ‘light is seen in the midst of darkness’ – the ‘righteousness and the wrath of God.’ (Karl Barth) [iv]

God’s loving “no” enables us to say “yes” to life. If were not for this restraint we would devour ourselves and each other.

So it is with a parent to their child, who practicing absolute freedom would play in busy traffic – {based on the arguments against restraint of some within todays intellectual and political class} – if it were not for the restraint and instruction of loving parents the results would be catastrophic for the child.

Rather than finding a trusted friend, Hamlet finds a nemesis. Someone he must outmanoeuvre in order to get to the truth. In short Hamlet refuses to believe a lie. Saying ”no” by refusing to conform to the deceit of those around him.

The crux of the story encourages us to see the dangers of loving enablers; people who tell us what we want to hear rather than what we need to hear.

It moves us to see the problems caused by those who discount the events and impact which negative experiences can have on others.Those who are satisfied with appearances over substance. From there we walk away challenged to live wisely in extreme days (Ephesians 5:15-16). Encouraging those around us who might have misplaced a thinking faith in exchange for cheap grace and blind allegiances.

Next to Hamlet himself, the greatest lessons we take away from Hamlet, the play, come to us by way of Polonius.

[i] Released in Australia under the title ‘Army Intelligence’

[ii] Machiavellianism finds its way to being the most likely among an assortment of other ideological possibilities.