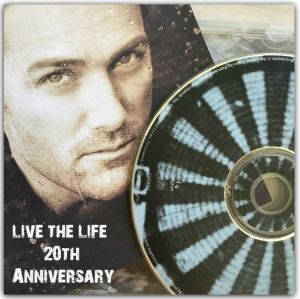 Twenty years ago Michael W. Smith released (what I regard to be) his best album. Before the release of ‘Live the Life’, if I’d have been asked about MWS, I would have fired back with mockery. I didn’t give him the credit that he deserved.

I never liked ‘Friends[i]’, and outside the song ’Breakdown[ii]’ I couldn’t have told you (off by heart) a whole lot about any of his albums prior to 1995.For me, his music was dated, far too “early 90’s Christian”, and too in line with mainstream C.C.M (Christian Contemporary Music).

In 1998 this all changed. ‘Live the Life’ entered the MWS discography. While retaining Smith’s reliance on keyboards, keys don’t feature in every song. Each song on ‘Live the life’ is unique.

The set list is carefully ordered. The artwork design is free from cliché colours and formatting. It’s sober, fresh, somewhat steam-punk inspired and is absent of the 1980’s pop gloss.

As a work of art and theology, ‘Live the Life’, gave MWS a seat at the table of the mid to late ‘90s Jesus music revival. Easily putting him in the same line-up as (post-Jesus Freak) D.C Talk, Third Day, Newsboys, and Jars of Clay.

Dealing with loss and tragedy permeates ‘Live the Life’. ‘Hello, Goodbye’ (T12) was written for friends who lost their new born child, Noah. The‘Song for Rich’ (T11) was an instrumental written in response to the tragic passing of Rich Mullins; and ‘In My Arms Again’ (T10) was written for the movie Titanic.

The remaining songs encourage faith in the midst of doubt, despair and brokenness. ‘Missing Person’ (T 1) and ‘Don’t Give Up’ (T6), speaks to the emptiness of routine; numbness in the face of the mundane. ‘Love me Good’ (T2), ‘Never Been Unloved’ (T4) and ‘I Know Your Name’ (T8) speak about fear, rejection and the danger of basing the truth of Christianity on feelings or achievements, instead of God’s love. ‘Matter of time’ (T9) celebrates the hope of reunion. ‘Let me Show you the Way’ (T7) and ‘Live the Life’ (T3) speak of inviting God into our decisions; that the Christian faith is to be lived, not left on a shelf – reminiscent of Swiss theologian, Karl Barth’s statement that ‘grace must be lived out, or it is not grace’[iii].

‘Live the Life’ was not a creative safe space, it was a sigh offered up as both prayer and witness. The album illustrates what it means to pray through existential cracks that appear in the armour of human pretence.

Breaking the chains of super-spiritual and superficial, positive-optimism, Smith carried us along as he broke free from his CCM roots, reached through the fog of conformity, doubt and loss; past Christian culture, and entered into the gutsy, joy drenched glory of the redemptive light of Christ.

Few could legitimately argue that ‘Live the Life’ was not a watershed moment for Michael W. Smith. Most albums since 1998, share a similar gravitas, they show a breakaway artist, who, by the grace of God had his faith and art reinvent him. Smith hasn’t had to fade from the limelight quietly, lean on gimmicks or acquire cheap tunes to prove that he is what he’s always been: a talented musician with an authentic heart for Jesus Christ.

Without ‘Live the Life’, the same depth of presence, which is found in all the albums which descend from it, wouldn’t exist. ‘Live the Life’ testifies not just to Smith’s renewed commitment to Christ in the midst of darkness, but to the instructive love of God, free from the constrictive routine of empty ritual.

‘Live the Life’ is written for the broken, from the broken, to the broken. Twenty years on, I still cannot walk away from this album, without being challenged, or moved by it.

‘It is asked, whether anyone can be a servant of Christ, that has not been tried with so many evils, perils, and vexations? I answer, that all these things are not indispensably required, but where these things are seen, there is, undoubtedly, a greater and more illustrious testimony afforded. That man, therefore, who is signalised by so many marks of distinction, will not despise those who are less illustrious, and less thoroughly tried, nor will he on that account be elated with pride; but still, whenever there is occasion for it, will be prepared, after Paul’s example, to exult with a holy triumph, in opposition to pretenders, provided he has an eye to Christ, not to himself. For the main thing is – that we serve Christ with a pure conscience. All others things are, as it were, additional.’