Jim Caviezel: “Indifference; This Destructive Tolerance of Evil, Is The Greatest Sin of The 21st Century” 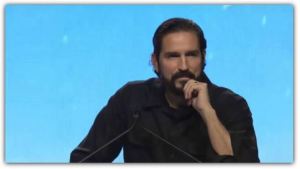 Alongside uncompromising words from Denzel Washington, the unapologetic resilience of Candace Cameron-Bure, Patricia Heaton, Kevin Sorbo, and even Mark Wahlberg, it’s comforting to know that not all of Hollywood is lost in a sea of ideological serfdom, sensuality, greed and opportunism.

Here’s a brief transcript of an excerpt from Jim Caviezel’s speech given to The Fellowship of Catholic University Students (F.O.C.U.S), on Jan. 5th 2018.

Caviezel ‘s speeches are usually deep. He’s well prepared and speaks with conviction. His talk here is no different, and it shows that Caviezel needs to step up and speak more often.

“After shooting Monte Cristo I inexplicably get a call from Mel Gibson. My agent didn’t call. My manager didn’t call. I didn’t know Mel Gibson. I wasn’t politicking for the role because nobody knew it was happening. Gibson wanted me to play Jesus Christ. He wants the guy with the initials of JC, who just happens to be 33 years of age, to play Jesus Christ. Is that a coincidence? I don’t think so.

Is your life a coincidence or is it all just a chance? Some of you may be miserable right now, confused, uncertain of the future, hurting. This is not the time to back off; or to give in. When I was up there on the cross, I learned that in his suffering was our Redemption. Remember the servant is no greater than the master. Each of us must carry our own cross.

There is a price for our faith, for our freedoms. I have been literally scourged. Hit by the whips. Crucified, struck by lightning; yes, open-heart surgery – that’s what happens after five and a half months of hypothermia. One day, during this shoot, my arm was wedged under that heavy beam, when someone yanked it in the other direction. My muscles wrenched, my shoulder separated, I fell to the ground.

Dropped my head into the sand, this take now remains in the movie. In the later part of the film, Jesus experiences a shoulder separation, well I now know what that felt like. Every day I had to pick up that thing. It was like a penance. It ripped into my shoulder, tearing up my flesh, and with each passing hour, it got heavier. Had this been shot in a studio, you never would have seen that performance. The suffering made my performance; just as it makes our lives.

Some of us now (and you know them) embrace a fake Christianity, where it’s all happy talk. I call it happy Jesus and glory. Guys, there was a lot of pain and suffering before the resurrection. Your path will be no different, so embrace your cross and race toward your goal.

I want you to go out into this pagan world. I want you to have the courage to step into this pagan world, and shamelessly express your faith in public. The world needs proud warriors, animated by their faith. Warriors like Saint Paul and St. Luke, who risked their names, their reputations, to take their faith, their love for Jesus, into the world. God is calling each one of us; each one of you to do great things, but how often we failed to respond; dismissing it as some mental blurp.

It is time for our generation now, to accept that call. The call of God urging all of us to give ourselves entirely to him, to see that gentle hand, guiding your path, but you first make must make the commitment, to start praying, to fast, to meditate on the Holy Scriptures, and to take the holy sacraments seriously; for we are a culture now in decline; a people in danger of succumbing to our excesses.

Our whole world is entrenched in sin and they’re in the quiets our hearts, God is calling out to us, each one of us, to give ourselves entirely to him, and how often we ignore him; ignore that sweet call.

We must shake off this indifference! This destructive tolerance of evil, only our faith in the wisdom of Christ can save us, but it requires warriors ready to risk their reputations, their names, even our very lives, to stand for the truth.

Set yourselves apart from this corrupt generation. Be saints. You weren’t made to fit in. You were born to stand out. For in our country now we are only too happy to go with the flow. We have a shrine to freedom now where all choices are equal, no matter what the consequences are. Do you honestly think this is true freedom?

Pope John Paul the great said, “Democracy cannot be sustained, without a shared commitment to certain moral truths about the human person in the human community”.

The basic question before a Democratic Society is this: how ought we to live together? Seeking an answer to this question: can society exclude moral truth and moral reasoning?