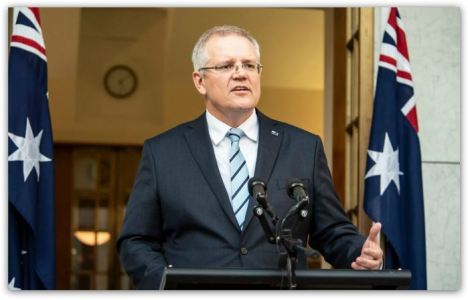 In a speech for the National Press Club on Wednesday, Prime Minister Scott Morrison, delivered the equivalent of a State of the Union address. From its content to his delivery, it was obvious that the Prime Minister was addressing the nation, not just the top end town.

His address didn’t present a government in damage control, but a government that is in control. Morrison was right to not use the opportunity to give ground to noisy dishonest critics on social media. Many of whom come across as detached from everyday Australia, and seem to exist only as a deliberate distraction anyway.

Morrison kept his cool during the peak of that crisis. Neither being dismayed nor swayed by the selfish, loud-mouthed distractions which have sent many a leader running to the hills in fear of social media disapproval.

By not following the crazed rabbit down its self-absorbed rabbit hole, Morrison communicated that he is unlike his haters, who seem to be feverously ranting on social media 18 hours a day. Unlike his dishonest critics, Morrison talked to, not at the Australian people. What a nation of hard workers heard was that like them, Morrison has his sleeves rolled up. He is hard at work with and for them, actively looking to implement practical solutions to genuine national concerns. Not chase speculation, or stroke over-inflated Twitterarti egos and emotion, by constantly apologising to them, or making decisions based on a false need to appease their abuse.

Former Sky News political commentator, David Speers partly shares this view, calling the speech a ‘double-down’, rather than a ‘reset’, showing a leader ‘who knows his own weaknesses – is on the defensive, unwilling to cede ground to his critics’.

Morrison isn’t a saint, and he knows it. This ability to use what Speers calls “knowledge of his own weaknesses” is a strength. Rather than weakening his leadership, Morrison inadvertently triggers those who’ve deemed him to be the enemy, simply by being a Prime Minister in the truest send of the word – first servant; a servant leader. What’s left exposed isn’t a death wound to the Morrison government, but the existence of a bigoted minority; flapping their hands in a furious attempt to keep control of their false narratives, quickly trying to shred the evidence that reveals their true nature, manipulative strategies, and dubious ideological agendas.

The strategy of resolve and resilience is working for the LNP. This is proven by the steady hand of the Prime Minister’s leadership, which includes his response to targeted and co-ordinated attacks during the Bushfire crisis. Look at how these full frontal assaults appeared to have the direct involvement of Twitter. When tweets from Leftist commentators, motivated by opportunism, all saturated with hate, showed up in the newsfeeds of unrelated accounts, it looked suspiciously like a Twitter backed Leftist attack on the Prime Minister.

Morrison’s first major speech of the year reasserted the strength’s of his government, dot pointing the LNP’s achievements since the May, 2019 election. Packaged into the address was an outline of goals and initiatives.

Summarising one of the Prime Minister’s major points, Speers rightfully identified how the speech sought to indict the states in culpability for the Bushfire crisis. Instead of leaving responsibility at the feet of the states, the Prime Minister proposes to ensure that the Federal Government has more of an ability to remedy, rescue from and respond to natural disasters, navigating constitutional concerns, and cutting through bureaucratic red tape.

But I must say, the scale of the bushfires this season – not least their simultaneous reach across many borders – has demonstrated to me the limits of these arrangements…

…As I’ve said before, I have been very conscious of testing the limits of constitutionally defined roles and responsibilities during this bushfire season.

But I believe there is now a clear community expectation that the Commonwealth should have the ability to respond in times of national emergency and disasters, particularly through deployment of our defence forces in circumstances where the life and property of Australians has been assessed to be under threat at that scale.’

Ex-Tony Abbott staffer, Peta Credlin gave the Prime Minister ‘full marks’, calling this is one of two things Scott Morrison ‘did very well’ during the speech. First, ‘He wrapped up the government’s response to the Bushfire crisis declaring that the national government was no longer going to take the back seat in national disasters.’ Second, the Prime Minister outlined clear, decisive, pre-emptive actions that they hope will protect Australia (and subsequently the Government) from the Coronavirus crisis currently impacting China. The Sky news host acknowledged how problematic these initiatives might be, and voiced support for the idea of a referendum, which would seek to give the federal government constitutional powers to act during a national crisis.

The ideas and initiatives laid out by the Prime Minister are pragmatic. Morrison’s address to the nation is a win for the LNP and it should resonate well with the Australian people. Especially those who are fed up with being shouted at by anti-Morrison fanatics on social media platforms.

I still am tempted to view Scott Morrison as a compromise between what Australians need, and what some loud mouthed Leftist Australians want. For all of his resilience and resolve, Morrison is still silent on abortion. The religious freedom bill aside, he appears elusive and unsupportive of Christians unjustly targeted by LGBT activists, and he still seems to be unsure about how to respond to the largely Marxist, apocalyptic climate change cults.

Still, along with the current LNP line-up, Scott Morrison has shown his government to be a political force to be reckoned with. If Morrison can continue to follow this path, and not kneel in fear before the vanity metrics of social media, and the hateful hashtag trends on Twitter, the LNP will be more than well on their way to being the government Australians voted for. May it be so.