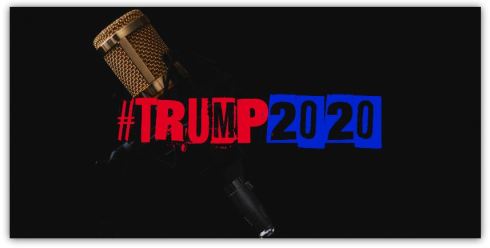 Whether you love him, loathe him, or are indifferent towards him, it was hard to ignore the applause for Trump’s Keystone speech, in South Dakota.

It’s not hard to see why Keystone was so popular either.

Although I had more of an issue with what the leftist Episcopalian denomination does with the Bible, Keystone was a big bounce back from Trump’s admittedly cheesy (if understandably necessary, given the context) photo in front of the damaged-by-“peaceful protesters”, historic St.John’s Church.

Not a highlight of the Trump presidency, but with his hands tied behind his back, who can really blame him? Better to have the Leftist dominated mainstream media wail and gripe about a photo of him holding a Bible, in a visible revolt against chaos and disorder, than have the MSM dominant the political narrative with manufactured stories about the President not leading the country, because he’s “hiding away in a bunker from (so-called) “peaceful protesters.”

Democrats have been absent without leave since the height of the Wuhan COVID-19 crisis, few seemed all too concerned about their lack of leadership, or the equally cringe worthy photo-op where key Democrats, draped in a traditional African kente cloth knelt down in solidarity with the Marxist LGBTQAAI+, Black Lives Matter political party.

The contrast between Trump at Church, and the Democrats on their knees, is that the former refused to surrender and genuflect, whereas the Democrats, seeing some political gain in selling the appearance of virtue, sold themselves into the hands of the Marxist mob. Some may argue that the Dems defused the tension and upheaval, and I’d be willing to give that some credence, if it weren’t for the fact that leaders of the freest nation earth bowing before Marx, gave a green light to cancel culture enthusiasts, and by doing so added fuel to the Leftist mob’s history raping, irrational iconoclasm.

Keystone was no St.John’s. His reference to  ‘Manifest Destiny’ aside, this speech was Trump at his best. He wasn’t on the defensive. He was no longer playing political catch up in the same way he was when the Wuhan COVID-19 crisis was overrun with rioters triggered by the entirely avoidable death of George Floyd, and egged on by Washington’s anti-Trump cabal.

Keystone was Trump standing up to the bureaucratic caste, who have been relentless in their campaign of hate. Career politicians and tenured academics tethered to the teat of neo-pagan secular humanism, seeking to undermine the America people, and Trump’s presidency, in order to maintain the hegemonic power handed to them without question since the late 1960s.

For some politicians, that amounts to decades of cosy deals, cushy offices, and cheesy photo-ops of their own that has done nothing for their constituents, but has done plenty for themselves and their own careers.

Keystone was a speech that spoke for the working class against the contempt of the political class who use them.

Evident in these words:

“Our nation is witnessing a merciless campaign to wipe out our history, defame our heroes, erase our values, and indoctrinate our children. Angry mobs are trying to tear down statues of our Founders, deface our most sacred memorials, and unleash a wave of violent crime in our cities…

One of their political weapons is “Cancel Culture” — driving people from their jobs, shaming dissenters, and demanding total submission from anyone who disagrees.  This is the very definition of totalitarianism, and it is completely alien to our culture and our values, and it has absolutely no place in the United States of America.

In our schools, our newsrooms, even our corporate boardrooms, there is a new far-left fascism that demands absolute allegiance.  If you do not speak its language, perform its rituals, recite its mantras, and follow its commandments, then you will be censored, banished, blacklisted, persecuted, and punished.  It’s not going to happen to us.

Make no mistake: this left-wing cultural revolution is designed to overthrow the American Revolution.  In so doing, they would destroy the very civilization that rescued billions from poverty, disease, violence, and hunger, and that lifted humanity to new heights of achievement, discovery, and progress…

The radical ideology attacking our country advances under the banner of social justice.  But in truth, it would demolish both justice and society.  It would transform justice into an instrument of division and vengeance, and it would turn our free and inclusive society into a place of repression, domination, and exclusion.”