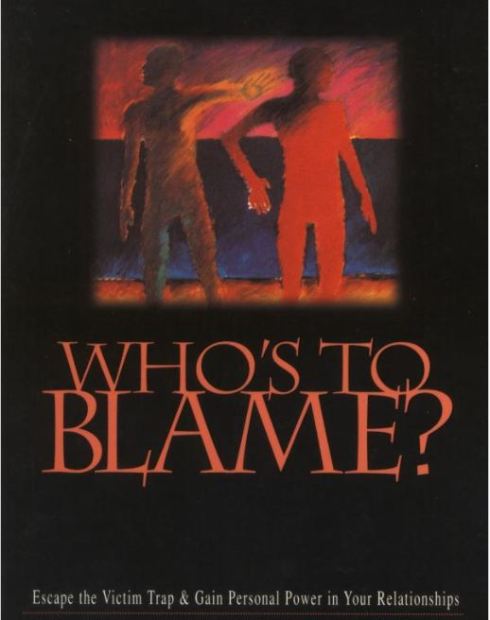 ‘Who’s to Blame?’ addresses the concept of the victim trap. This is created when emotions such as guilt, shame, fear, anger and grief are mismanaged. Blame, accusation, distorted perspectives, the mismanagement of fear, setting boundaries and the wrongful denial of our own God-granted personal power are all at the heart of this text. Therefore this review will outline Carmen Berry and Mark Baker’s discussion on how important it is to keep (not make) perpetrators of abuse accountable by encouraging victims to set boundaries and redefine relationships, which are proven to be unhealthy (understood by the authors as being not mutually beneficial).

According to Berry and Baker, we know we have ‘fallen into the victim trap, when our identities are heavily influenced, if not defined, by past abuse’ (1996:216). Abuse equates to any situation where we have been ‘mistreated, i.e.: not given the respect, protection, and honour deserved’ (1996:165); ‘Self-esteem, a sense of self-worth, and even identity is undermined by abuse’ (1996:147 & 148). They assert that ‘our personalities are shaped by the way we perceive how others have treated us’ (1996:79). Symptoms of this could include a ‘power imbalance…where:

c) As a result of mistreatment ‘develop lifelong attitudes about ourselves based on how we were treated then’ (Baker & Berry 1996:11)

d) ‘When we are mistreated, especially if the violation occurs in childhood, it is common to feel damaged, defective and worthless’ (1996:146).

A key ontological imperative for Berry and Baker is that we all have personal power. They  explain that personal power is ‘not about being more than someone else, but about knowing who you are and who you are not…'(1996:213 & 214)

They believe in making the ‘unconscious conscious’ (1996:98). An important part of this is understanding that:

‘human pain doesn’t stay frozen in a moment of time but echoes far beyond instances of mistreatment. Unless we regain a sense of our personal power, we carry our pain in our minds, our bodies, and in the way we treat other people’ (1996:19).

A significant element to arriving at this understanding is acknowledging that behaviour, such as denial, ‘places us in the position of being unaware and even naïve. Neglecting to resolve painful and anxious feelings keep us tied to the abuse and the abuser’ (paraphrased 1996:24).Engaging in a quest for revenge only serves to tie the victim to the offender. The reason for this is that retaliation escalates the conflict by feeding the cycle of abuse. For Berry and Baker, blame and denial are false ‘shields of protection that create a prison of isolation’ (1996:73, paraphrased)

Another way in which people may find themselves caught in the victim trap is when they ‘feel responsible for another adult’s actions or emotional well-being’ (1996:10). Berry and Baker state:

‘it is often difficult to recognize that a relationship is ensnared in the victim trap. It is only with time that we can determine this. For example: a pattern of behaviour, such as mismanaged fear, will emerge that establishes whether we are in healthy relationships or not’ (paraphrased Berry & Baker 1996:10).

‘we fall into the victim trap by using guilt as a means of controlling others or by allowing ourselves to be controlled in an effort to please others…taking responsibility for their unhappiness and attempting to please to assuage a false sense of guilt’ (1996:105).

Berry and Baker suggest that one key area where we can ‘manage our emotions’ (1996:27) is by taking responsibility for our pain and ‘not taking responsibility for the actions of others’ (1996:58). To do this we need to examine the feeling behind the feeling and then establish and ‘enforce’ (1996:53) boundaries in order to help us ‘redefine relationships’ (1996:25 & 101) where necessary.

Putting boundaries in place will involve communicating consequences for those who violate our borders through violence; physical, emotional, psychological or spiritual abuse. If this does not happen then we fall into the victim trap by assigning blame either to ourselves or others. Consequently inaction creates a ‘false sense of security that limits our understanding of reality’ (1996:20 & 25). The result is mismanaged fear because it ‘assigns blame from a distance or fights a perceived enemy, using blame as a weapon’ (1996: 65).

This advice comes with the caveat which is that ‘our efforts to set boundaries is not to change others’ (1996:54). This is because the motivation which drives setting boundaries is personal responsibility for change because ‘confronting someone with our feelings and expecting them to change is unrealistic’ (1996:60).

In explaining how to set boundaries effectively Berry and Baker make a distinction between vulnerability and openness (1996:79 & 80). For example: “vulnerability” requires wholehearted contribution: it is truthful and prone to attack, whereas “openness” can be a form of self-protection; a shield (that becomes a prison) which is often expressed as a ‘façade making us look like something we are not… contra to vulnerability, openness creates the illusion of intimacy with others’ (1996:80).

When we recognise that we truly have the power to change ourselves and our situation we can engage in positive action on behalf of ourselves and others. By doing this we learn to deal with  difficult people, ‘gaining the confidence to manage whatever emotions we have in order to hold others accountable and resolve unfinished business from the past’ (1996:28).

Baker and Berry’s advice reinforces the concepts advocated in ‘cognitive behavioural therapy’. They encourage replacing lies and misbeliefs, with the truth. 2 Cor. 10:4-5 comes to mind.

Blame is indicative of ‘an overwhelming hopelessness, despair and regret’ (1996:71)…’blaming is an ineffective way to protect ourselves from harm because it draws attention away from the genuine problem and the reality of our power in the situation’ (1996:72).

This pertains to mismanaged power which is evidenced when someone attacks us from a place of ‘self-righteous’ (1996:71) indignation – a superior sense of morality (seen in both left and right socio-political polemics which are often infused with emotionalism), a false sense of entitlement and hyperbole (‘’I did this for you and you’ve never done anything for me’’). For example: we moralize the issue; flawed arguments based on ‘opinion’ (1996:51) utilising ad hominem (elitist overgeneralization e.g.: one bad/all bad), tu quo que (hypocrisy) and reductio ad absurdum (ridicule by exaggeration), rather than on faith or fact.

Communicating our pain requires the right approach. For Berry and Baker this means ‘having the courage (knowledge of self-worth, freedom and ability grounded in God) to participate in the difficult conversations’ (1996:89, emphasis mine). According to Berry and Baker in order ‘to manage power effectively, we must develop a healthy view of failure’ (1996:41-50) which moves towards a ‘centred self’ (1996:50).This is significant because ’healthy power is assertive rather than aggressive, healing rather than hurtful…the point of power is not to look strong to others but to become stronger with them’ (1996:47 & 49).

In Conclusion ‘Who’s to blame?’ is a useful guide to helping the individual take responsible action for the potential outcomes of their circumstances, emotions and relationships. The essence of this review has been to outline why Berry and Baker believe we all have power to redefine unhealthy relationships. In order to do this I primarily focused on what the victim trap is, what the authors consider the causes to be and how it can be avoided. Reading victimization through the lens of Berry and Baker’s work has made a significant contribution to my journey towards healing. Blame, accusation, distorted perspectives, the mismanagement of fear, setting boundaries and the wrongful denial of our own God-granted personal power are al at the heart of this text.

For the authors, holding others accountable by redefining relationships involves taking responsibility for both our actions and our pain. This is the antithesis to engaging in blame, revenge (1996:147) and feeling as though we are responsible for the responses of others. Under the surface this text challenges the popular notion of ‘just ignore them’, as well as the overly simplistic ‘’given’’ – ‘forgive and forget’.As such the material within ‘Who’s to blame?’ challenges the false belief that assumes victims of abuse are powerless to change or influence change themselves. ‘Who’s to blame?’ can be summarised by the statement ‘seek accountability not revenge’ (1996:167). One way we can apply this to our lives is by starting to develop a better understanding of the differences between discipline and abuse.