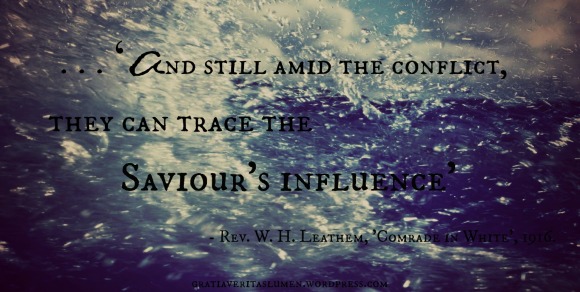 ‘By Christmas there was a widespread popular sense for a thoroughgoing reconciliation in no-man’s land. What had happened at Christmas in 1914 was the needful precedent. It was a sort of playful legend in the army. On Christmas Day there would be a going over and a shaking of hands and exchange of souvenirs and drinks. Both sides looked forward to it.

But the authorities evidently thought it dangerous. Orders to the effect that there should be no fraternisation were sent out, and a staff-officer here and there spent Christmas Eve in the trenches to see that the orders were carried out. He could not however effect very much…At dawn therefore parties went over, and whole battalions might have followed them had not the artillery at once set up a barrage. It was found also that sentries on both sides had been ordered to fire. Some obeyed, some did not. Meanwhile the troops about Neuve Chapelle and Aubers got across in large bodies. Even on the Guards’ front men risked their lives to shake hands. Did not one thus lose his life that morning!

There is a little old cemetery by the side of the road a mile or so from Laventie, and there lie prominently side by side two corporals of the Sixth Black Watch (Newell and Willis) and behind their graves is that of a certain Sergeant Oliver[i] who perished on Christmas Day…On all graves are weeds except on that of the man who gave his life to shake hands on Christmas Day’[ii].

There are some parallels here that meet with the Christ story. For instance light dawns on a dark day and is quickly extinguished.

They rose out of the trenches in spite of direct opposition and gifted us with a bewildering example of faith, courage and humanity.

We are told by Matthew that Joseph is warned in a dream about the possible act of infanticide. Carried out by a ruler who, after speaking with ‘wise men from the East’, feared the possibility of prophetic fulfilment. Fearing that a boy in Bethlehem ‘had been born’ (Mt.2:2, ESV) and that He would be a challenge to Herod’s authority. In a violent act of suppression, Herod, like Pilot not only becomes a key historical character, his actions also indicate how serious the socio-political nature of the event was perceived. The point is that the prophetic fulfilment was so intensely anticipated, that a ruler would eventually go to great lengths in order to undermine and eliminate a child:

“Rise, take the child and his mother, and flee to Egypt, and remain there until I tell you, for Herod is about to search for the child, to destroy him.” (Mt.2:13, ESV)

In 1945 C.S Lewis, himself a World War One survivor,  preached these words:

‘Christ has risen, and so we shall rise[iii]… To be sure, it feels wintry enough still: but often in the very early spring it feels like that…The spring comes slowly down this way; but the great thing is that a corner has been turned…It remains for us to follow or not, to die in this cosmic winter, or to go into that spring and that summer… I believe that God really has dived down into the bottom of creation, and has come up bringing the whole redeemed nature on His shoulders.’[iv]

The difference between the soldiers in those trenches and Jesus Christ, is that in Him, God reaches out to us for more than just a moment of peace.

God’s eternal handshake with humanity is the gift given in the incarnation of His son Jesus the Christ. The effort he made marks the landscape of Christmas.

In Jesus Christ  God reveals Himself as God for us; His Word become flesh.

This event is the advent. That God became man and dwelt among us, is present with us in the Holy Spirit, and will be physically present with us at a future time determined by God.

He seeks a dwelling place with humanity. We read that:

“He will dwell with them, they will be his people, and God Himself will be with them as their God. He will wipe away every tear from their eyes, and death shall be no more, neither shall there be mourning, nor crying, nor pain anymore, for the former things have passed away…I am making all things new” (Rev.21:3-4).

Resurrection is God’s doing, God’s empowering. In reflections during advent we discover that rise, rising, and being risen are key theological concepts within a holistic advent reflection. In what theologians call Christology, we encounter the anticipation of the future-event based on the past-event. Christ becomes the fulfilment of promise. The end is established in order to begin. Since resurrection is a gospel proclamation of liberation, the word rise is a  theme not to be isolated or boxed into Easter reflections alone.

May the events of Christmas 1914 & 1915 be a strong reminder to us that even in the grip of tragedy; wisdom, reconciliation, mercy and justice are themes with deep roots in the significance of the Christ-mass – traces of the Saviour’s influence.

May they not be forgotten.

One thought on “1915: Tracing the Saviour’s Influence in No-Mans Land”