I have a difficult relationship with Anzac day.

I’m fond of the practice of remembrance, but conflicted with what it forces me to remember.

It reminds the Australian people of their unique history, and place in the world. One that Australians can too easily take for granted.

For those of us with forefathers who were broken by war, it can be difficult. The war they fought, is the war they also brought home.

As their children we find ourselves busy trying to reconcile ourselves with those who found it difficult to be repatriated.

A personal example of this is my Great-Great grandfather, Frederick William Petrie. He was a locomotive fireman (stoker) and a volunteer, who’d enlisted in the AIF in December 1916, at the age of 36.

He went to France, where he became a corporal in the ‘6th Australian broad gauge railroad company’ (6th A.B.G.R.O Coy). His war record shows that he served until July, 1918. Four months before the war was officially declared over.

Frederick was discharged due to ‘neurasthenia’; a general condition related to ‘shell shock’.

That is, he suffered from ‘severe fatigue and emotional distress’.

This was more than likely brought on by the trauma of spending eighteen months  shovelling coal into the belly of a steam train, moving back and forth with supplies to ‘barren and bloodied battlefields’ (King).

Although Frederick was a non-combatant, as an engineer, his support role was crucial to the allied advance.

It put him in harms way in one of the most back breaking, nerve shattering jobs available – You can’t dodge artillery barrages in a train, nor bombs from the air dropped by an enemy you can’t see; and can only brace against after the first shell has landed.

Lt. R.J Burchell in an interview for the ‘West Australian’ in 1919 said about the circumstances train drivers faced:

‘we were not fighting troops, but I may say that the whole of our sphere of operations was within range of the enemy’s artillery, and he paid particular attention to the railways, both with his heavy guns and aeroplane bombs. Even…the furthest back station of the 4th company was under fire from the 15in guns…With both planes and guns the enemy paid systematic attention to our main lines of rail, so you can realise that life in a railway unit was not altogether a picnic. The 5th Coy…had the worst of it…their section of line was continually exposed to bomb raids and gunfire, night and day, and their casualties were heavy…the amount of work behind a great army is tremendous. Despite the network of lines, I have seen 280 trains per day pass over a single section of line, and trains carry 1000-ton loads…the difficulties and odds against which they had to contend are seldom realised.’

My great-great grandfather returned to Australia in 1918, and had difficulty readjusting to a peacetime existence.

He helped raise my Grandfather, ‘Ted’, who was practically abandoned by his father and mother after their shotgun wedding fell through.

‘Ted’ joined the Australian Airforce as an aircraft fitter in the 1950’s. A testimony from his eventual court-martial indicates the difficulty imposed on families by the ongoing effects of war:

Adding to this the representative for his defence argued that: 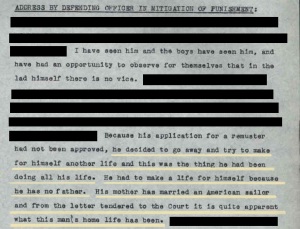 I simply want to state that for me and my family, along with a large portion of Australians, Anzac day forces us to confront a ‘stubborn fact – the brutally elementary data’ (Arendt cited by Elshtain, 2000, p.135), which proves that the causalities of war are not only the servicemen thrown into it’s abyss, but their families as well.

There’s a ripple effect that impacts wives, children and the generations that followed these men.

Anzac day is not about a nations ideology. Anzac day is about a nations remembrance; its humanity and its theology. This is exhibited every April when a nation makes room for healing, gratitude and the acknowledgement that, those generations directly impacted by war are not forgotten.

Anzac day allows us the room to reflect and explain to others that we bear the burden of their scars, not just the benefit of their medals.

Anzac day should affect us.

If the gravity of it doesn’t force us to reflect, we will end up serving an ignorance that puts us one misstep away from repeating history.

This also has theological relevance. Such as James’ call to look out for the widow and the orphan (Jm.1:27), and David’s reminder that ‘God is the father of the fatherless and protector of widows’ (Ps.68:5).

The benefit of Anzac day is that it allows a nation the room to grieve collectively.

According to my family history, we are the children of soldiers.

We still feel the effects of the price they paid.

These are largely caused by a generation who’s trauma informs ours.

Because this goes unacknowledged, it is like watching ripples spread out from a point of impact in my family’s history.

Anzac day helps me to frame that drama in a very real context.

War, is in large part the cause of that dysfunction, and the ashes we inherit.

War costs families. It diminishes the potential for healthy and holistic relationships.

For which the only antidote is God’s door of grace, and His living example of forgiveness.

This is why Anzac day remains an important practice of remembrance.

It allows each generation to move forward.

It allows room for people to own their stories, leaving at the foot of the cross, the psychological, spiritual, emotional and financial dysfunction that war causes.

The hope of Anzac Day is Jesus Christ.

It compels us to align ourselves with the table turning Messiah (Mt.21:12),  who, through His Spirit, constantly works in ordinary people, doing extraordinary things, even when we don’t see it.

It’s only here that we can genuinely catch our breath, and see beauty rise up from the ashes.

3 thoughts on “When The Ashes You Inherit Have a Strong Connection to The Legacy of War.”