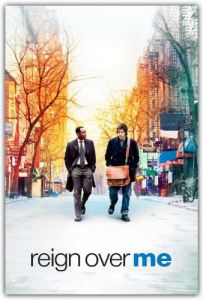 Sandler’s character, Charlie Fineman, is a widower who looks a lot like Bob Dylan in his early days. Fineman is a dentist by trade, and an apartment dwelling hermit, living in isolation within New York City, who suffers from post-traumatic stress and depression. Sandler’s signature, unpredictable outbursts, are reminiscent of  ‘Happy Gilmore‘ and ‘Anger Management.’

The behavioural similarity fits perfectly with the circumstances, making Sandler’s portrayal of the grief-stricken Fineman, not only believable, but in my opinion, Oscar worthy.

At the centre of the story-line are events which took place during September 11, 2001. The film approaches this subject with sensitivity. Avoiding  politics, the screenwriters look past conspiracy theories. Evidenced by the glaring absence of any mention of Islamism or Islamic terrorism.

On balance, the film does dedicate a scene to some news articles, albeit ones that are discussing America’s response. I have no real issue with this, for the following reason: The screenwriters are respecting their audience by not spelling out the obvious.

I have huge respect for directors and writers who do this. Within the context of ‘Reign Over Me‘, the strategy is understandable. It keeps the focus of the audience on Charlie Fineman’s journey through grief.

In addition to Sandler’s brilliant portrayal of a forgotten victim of September 11, both Don Cheadle (of Hotel Rwanda fame) and Liv Tyler, add to the movie’s overall tone. They bring to the film a warmth, that is juxtaposed with Fineman’s colossal battle against the abyss of grief.

Cheadle is Sandler’s college room-mate; also a dentist and extremely successful in his own right. Cheadle’s character (Alan Johnson) is aware of Fineman’s tragic past, but had lost contact with him over the years. Johnson has his own issues, which all start to come to bare. After randomly crossing paths with Fineman in the street, Johnson seeks to reconnect with Fineman, and by default, his younger college days.

Not completely aware of Fineman’s suffering, Johnson quickly recognises the pain his friend is suffering with. He begins to try to help Fineman. This creates tension between Johnson and his wife, and a series of misunderstandings with the ever suspicious Fineman.

He wants no help. Until he opts to go see Johnson’s long-term friend and psychologist, Angela Oakhurst (played by Liv Tyler).

Oakhurst works to bring Fineman to a place where he can address the past and his own brokenness, in his own time. Cheadle’s performance keeps the film moving along, perfectly complementing Sandler’s, and Liv Tyler compliments Cheadle. This perfect casting circle is made complete when Donald Sutherland turns up in the role of Judge Rains.

The film comes to a close with Fineman’s in-laws trying to speak with him. Fineman breaks downs, becomes violent, and as a result is held in custody for psychological evaluation.

As Rains becomes aware of Fineman’s emotional, and psychological state, he sees straight through the opportunistic lawyer representing Fineman’s in-laws. With Solomon-esk wisdom Rains outmanoeuvres the lawyer, making it clear that what he has in Fineman is a forgotten victim of September 11, 2001. A victim who deserves a chance to be heard, helped and respected.

‘Reign Over Me‘, has some unnecessary language and some interesting sub plots.  Though they seem to detract from the film at first, as the story progress, the genius of their inclusion in the film  becomes clear. The sub plots bring a complex meta plot, and its characters together. The sub plots  fortify applause as the audience finds a resolution to their desire to see Fineman heal, and overcome the obstacles forced upon him.

The film isn’t complete without the impressive soundtrack. The stand out song is Eddie Vedder’s cover of The Who’s, ‘Love, Reign O’er Me‘ and The Fray’s, ‘How to Save a Life’.  The live and studio versions included; Vedder’s performance, as far as I have heard, is his best vocal work in a song.

As far as art and theology goes, ‘Reign Over Me’ is rich in metaphor. What I see in ‘Reign Over Me‘ is God’s redemptive love – displayed in the film by Cheadle, Tyler and Sutherland’s characters.

They fight for Fineman. Yet still place an emphasis on him taking responsibility for his own actions. Fineman was empowered, but he still had to decide to respond to the love and help (grace – salvation) he was offered.

Since the theme of God’s redemptive love is part of a lot of current discussion, the metaphors are worth noting.

The freedom we find in God’s redemptive love is not a “freedom” that is said to be found in human love. For Fineman, human love was not to be trusted. Such love is at best selfish opportunism. At worst morbid existential navel gazing and/or unrealistic, self-centred optimism.

God’s love draws us out of ourselves in the form of His gracious Word spoken to humanity, which is both invitation and command (Jesus Christ and Covenant). We are drawn out of ourselves to be free for God and our neighbour. Such freedom comes with limitations.

I seem to be on a roll with recommending and reviewing art that, to me, is written, for the broken, from the broken, to the broken.

‘Reign Over Me‘, in my opinion, fits this category like no other film I’ve seen.

It hits at our grief, the lies we tell ourselves, and the traps we fall into because we fall under the radar of complacent, and dismissive family members, who, in overlooking the complexities of our brokenness, can seem to demand more than we are ready to give; simply because we don’t know how, or don’t yet have the strength to give it.

‘Reign Over Me‘ is an honest prayer-filled, heart-wrenching scream that meets with what Lacey Strum described as cathartic emotional vomit, when summing up her reasons for screaming in songs:

‘Like ‘emotional vomit’, lyrics about ‘horrible abuse, if sung honestly, must be screamed…Screaming was my natural response to injustice… When I started writing music with screaming in it, the point was to hit someone back… After God rescued me, however, I found a purpose for my screaming: to speak truth over the lies in people’s hearts. Lies like the ones I believed about myself when I wanted to die.’ – (Lacey Sturm, 2014 The Reason, pp.77-82)

Let there be light.

I did not receive any remuneration for this review, in any form.

4 thoughts on “‘Reign Over Me’ is Adam Sandler’s Best Movie, & Eddie Vedder’s Best Vocal Work In a Cover Song, By a Mile”