Back in early February my family and I came across one of the Australian War Memorial’s W.W.2 travelling art exhibits.  Random find, but we’re always keeping an eye out for opportunities to learn. We’d been out doing our somewhat  PD.H.PE routine (hence the rough around my edges look in the pic). Then wound up viewing some of Australia’s most significant art, created by some of Australia’s biggest painters.

One definite highlight were the Russell Drysdale artworks. I’d come to learn about Drysdale in senior high school. The reason for my initial attraction to his work was how surrealism influenced his style.

Once I realised that what we were looking at were Drysdale originals, I was awestruck. It may sound shrill, but goosebumps and a chill accompanied the importance of what hung on the wall before us. The weight of significance was inescapable. The moment caught me. It wouldn’t be all that wrong to say it was a breathtaking moment. I paused in the presence of history.

‘Soldier’ has many different angles. It communicates a paradox: a cold urgency, and the calm, maddening boredom of war. Drysdale’s use of colour gives off a sense of anticipation, and mystery. Is the soldier returning from the front? Is he about to depart? His choice of background colours wrap around the soldier, as much as they splash light around his relaxed posture. Hands in his pocket, face forward, the impression is that he’s warm, but calm, but contemplative.

Noticeably, there’s an absence of any cigarettes, food or water. This adds to the idea that he is waiting. There’s an innocence, an order in the midst of chaos, almost a sense of relief mixed with anticipation. Like Drysdale is either saying this is the calm before the storm, or the war is over. 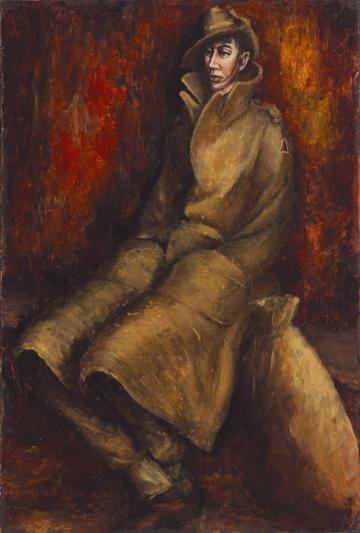 Drysdale’s genius (another reason for my appreciation of his work) is how each painting, including the Crucifixion, has a Christian like reverence for life, even in the midst of suffering; a complex, well thought out theological grasp of the world around us. The context for Crucifixion was the Holocaust and Hiroshima. Events relevant to the era he lived in (1912-1981). 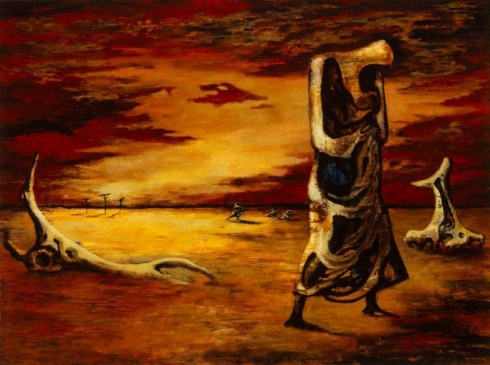 There’s a realism to Drysdale’s work – call it gritty humanity, call it an awareness of human frailty  and the infinite qualitative distinction, ‘God is God and we are not’ – a kind of warts and all hope, covered in dry, red dust, with a cautious optimistic attached that looks towards the promise of rain in the storm clouds breaching the horizon.

This helps explain his importance as a painter. Drysdale doesn’t just see and communicate what others have missed. He observes and points to who Australians are, based on what Australians do. It’s because of this that his art, his voice, is a national treasure. It’s why, standing before ‘Soldier’, I was awestruck. Brought to a standstill by the realisation that what was before me wasn’t just a painting, it was a poignant reminder that Australian identity isn’t determined by activists who would rather divide us, than unite us.

As a theologian, I see within the fabric of his work a rich prophetic hope. The equivalent of Johnny Cash’s separation of the sacred from the silly, an honest, raw, restorative, non-violent iconoclasm. The real Jesus confronting the faux Jesus we create in our own image. John 14:6 and Romans 6:4 come alive. The unequivocal: Without Christ, nothing. With Christ, everything.

Drysdale captured the emotion of this dry continent, its land and the resilience of its people like no one did before him, or has done since. His work isn’t drenched in politics or activism; it simply communicates the story of Australia and Australians, going to a depth that words seem unable to go. He ‘didn’t incorporate literary subjects and characters from external sources into the Australian scene but sought to represent people in their places.’ (Australian National Dictionary)

To be in the actual presence of his work is like standing on the same ground he stood on, hearing the same things he heard; being invited to grasp the same appreciation and love he had for Australia and its people. Though the message is sometimes confronting, there is nothing joyless about his work. In my opinion, Drysdale was/is Australia’s best painter, Sydney Nolan comes in at a close 2nd.

Below is some of the follow up work I did with my homeschoolers yesterday.

One thought on “Russell Drysdale Didn’t Create An Australian Identity, He Awakened Australians To It”