The tragic death of George Floyd was primarily about law enforcement’s abuse of deadly force. All the evidence suggests racism was not a motivator. Yet, many in the Leftist mainstream media, along with their celebrity sycophants, and some well-meaning community leaders jumped straight to the “it’s racist” button, using George’s death as an excuse to once again impose their vacuous ideological paradigm on the rest of us, as they parade their own self-righteous virtue all over social media.

The majority of images, and comments, from “kill whitey”, to those laden with white guilt, and self-hatred, weren’t altruistic. They weren’t about seeking justice for George. They were shared to either perpetuate, or avoid the “you’re white, therefore you’re racist” fallacy. It’s all a self-righteous show that puts appearances before substance; emotion before evidence; bandwagon activism before just causes.

Images posted of George to social media, claiming that George’s death was the result of “systemic racism” within the “white” community perpetuates the racist myth that our melanin or ethnicity defines our character, when it doesn’t. On a deeper level, this kind of fallacious belief extracts sin from racism. Since sin permeates all ethnicities, it removes the sin of racism from select communities. In turn those select communities are deemed sinless; exempt, immune from the virus.

This genetic fallacy takes attention away from the injustices carried out by a minority of law enforcement officers, who abuse the power and trust handed to them. It exaggerates the sin of racism where racism doesn’t exist, and dilutes action against racism where it does exist.

Justice for George begins here. It begins by separating fact from fiction. Justice, free from the political agendas of predominantly loud, Leftist activists. Activists who would love nothing more than to ignite a race war in order to take down people that they themselves deem unworthy of life – people with a different view, who offer reasoned criticism or don’t follow along blindly.

It should be no surprise that the same people screaming “evidence of systemic racism” now, without evidence to back that claim up, hate Trump with a vengeance. Where were they when Democrat presidential candidate, Joe Biden made racist remarks? Biden inferred to black America that they were owned by the Democrat Party because they owed the Democrat Party – words USA Today was right to describe as ‘voter intimidation.’

As tragic, as unnecessary, as senseless, and as vile as the murder of George Floyd is, that doesn’t change the fact that under the definition of racism, it is racist to assume racism was the chief motivator solely because the police officer was white!

The emotionally charged jump past the evidence, towards racist conclusions, has turned just protests into unjust rioting. Personal property is destroyed, communities suffer and cities burn. The political charged narrative has trumped justice, mercy and love.

We need to preserve the truth, not perpetuate Leftist myths which preach a false narrative that stirs up fear, division, as its progenitors steer an unquestioning public towards an outcome that serves their own political ends.

When I asked on social media about whether there was proof of racism in this case, I was shutdown. I asked about whether or not George’s death was racially motivated or simply an example of arrogant law enforcement applying an unnecessary, excessive use of force? I asked for people to back up their virtue signalling with evidence to support their claims.

In the case of Kevin Max, an ex-DC Talk member, who now describes himself as a leftist, my respectful, reasoned comments were deleted. Then my account blocked.

The message was clear: “don’t challenge the narrative”, “don’t question the party line.”

The lingering questions attached are about political agenda.  As suggested on Twitter by Jesse Lee Peterson, and at least one other Twitter user: 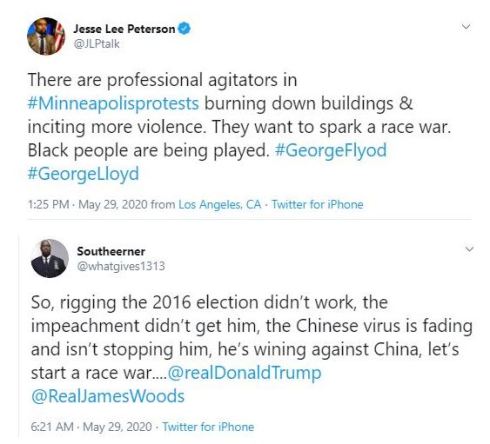 With reports of ANTIFA (and it would be fair to assume, white nationalist fringe dwellers) on the ground fuelling the riots, Leftists appear to want a race war. Accompanied by their sense of entitlement to black Americans this suggests that the Left is confident of winning the 2020 election in the United States on a zero sum basis of pitching black against white. 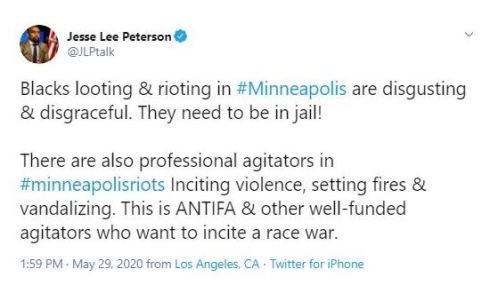 The Left’s chosen battle field for the election may very well be a community divided by hatred. Their weapon of choice, a reigniting of old wounds, in order to take a throne that they consider to be rightfully theirs.

What these lingering questions imply is that the outrage isn’t about justice for George. The outrage is a pretence for a last ditch attempt to reinstate a corrupt, totalitarian power structure, threatened by Donald Trump’s presidency because his election signaled a broad rejection of Leftist utopianism.

Justice for George is about achieving justice for all victims of law enforcement who’ve abused the power and trust handed to them. Racism may have played a role, but that’s not what the evidence points to. Amy Swearer’s well written piece in the Daily Signal backs this conclusion.

According to The Week’s, Kathryn Krawczyk, the officer who pinned George down, had a history of conduct complaints laid against him, with zero action taken by then prosecutor, and now potential Vice-Presidential candidate, Sen. Amy Klobuchar’s (Democrat-Minn.).

A radicalized media, aligned comfortably with the far-Left, counts their profits, as they warm their hands by fires they helped to ignite. They play the heart strings of Americans like a fiddle, and in the process stop all thinking Americans from questioning their agenda. That they appear to be succeeding is beyond tragic.

I’m not alone. Candace Owens, among many others, including Brandon Tatum, Alveda King, and Terrance Williams, took to social media to call for calm, and for a push back against the narrative. On Instagram yesterday, Owen’s passionately wrote:

“This is Minnesota where black people are now looting and rioting to avenge the death of George Floyd.

EXACTLY AS I PREDICTED AND WHY I TOLD YOU MORONS NOT TO TAKE THE MEDIA BAIT.

No one—not a single solitary person defended or excused the death of George Floyd, so why is this rioting happen? Because that is what the media wanted. Because it’s what they have trained us to do since the mid 60’s, when they married us to the Democrat Party….white liberal politicians will stump on our issues, pretending to be our shoulders to cry on. They will tell us it’s because of system oppression and we will believe it and repeat the same bullshit again, EVERY FOUR YEARS.

We allow our black youth to be programmed by a satanic media that tells them that they will never be anything, and life will never be fair so they MIGHT AS WELL lead a life of anger and crime.

Our inability to THINK through emotional tragedies is our biggest curse, and the Democrat Party’s biggest blessing.’ (Abridged)

One of the few things this proves is that Westerners are slipping further and further away from objective morality, fact based evidence, and intellectual inquiry.

Instead of lament and remedy, our poets applaud as fires burn, and our leaders submit to an acquiescent quid pro quo, while freedom, truth and honesty, lay mortally wounded on the altar of the cult of modern liberalism.

Photo by Jack Finnigan on Unsplash