Barth: In Jesus Christ Sin Is Condemned By Omission 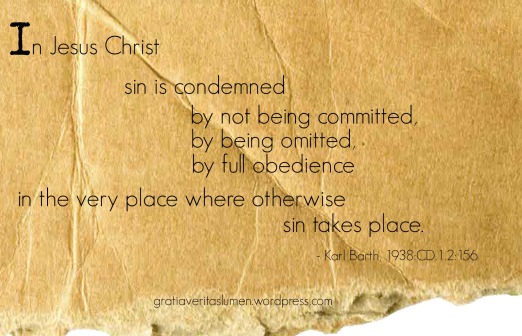 Here are some highlights from Barth’s discussion on Christology in Church Dogmatics 1:2. These don’t convey the full gravitas of his discourse. It’s always a matter of caution when quoting others to be careful not to remove their words from their context. This is because by sharing parts outside their overall home, potentially weakens some of the overall emphasis, passion and rational clarity with which an author writes.

Hopefully this doesn’t do that.

‘…though Jesus Christ became a curse for us. Jesus Christ was not a sinful man…it is at this point that the Biblical doctrine of the incarnation of the Word, and the familiar parallels in the history of religions part company. There are also incarnations of Isis and Osiris; there is an incarnation in Buddha and Zoroaster. BUT it is only the New Testament that says “he hath made him to be sin” and “he became a curse for us”. Only here do we have so strict a concept of Emmanuel, of revelation and reconciliation’[i]

‘Sin is condemned by not being committed, by being omitted, by full obedience now being found in the very place where otherwise sin necessarily and irresistibly takes place. The meaning of the incarnation is: that now in the flesh – that is not done which all flesh does…if we ask where the sinlessness, or (positively) the obedience of Christ, is to be seen, it is not enough to look for it in this man’s excellences of character, virtues or good works.

For we can only repeat that the New Testament certainly did not present Jesus Christ as the moral ideal, and if we apply the canons usually applied to the construction of a moral ideal, we may easily fall into certain difficulties of solution, whether with the Jesus of the Synoptics (Matthew, Mark & Luke) or with the Jesus of John’s gospel.

Jesus Christ’s obedience consists in the fact that He willed to be and was only this one thing with all its consequences, God in the flesh, the divine bearer of the burden which man and woman, as a sinners must bear.’[ii]

Barth seems to be doing his best to push against the influences of philosophical ideals like Nietzsche’s ‘Übermensch‘. I.e.: an idea that could lead to claims that “historical Jesus” was in fact superhuman; a hero. Although he doesn’t make the connection, one might think of the heroes of Nordic religion such as Thor and Odin.

With the historical context of Europe, 1938 in mind. It is not hard to see how the language Barth employs in his Christological discussion, flows from his stand against Hitlerism/Fascism. The language also reflects Barth’s support for the Confessing Church, who refused to surrender faith, theology, the Church and Jesus Christ, to join an already mesmerised majority, obsessed with the mysticism and promise (so called) surrounding fascist ideology.

[i]Barth, K. 1936 The Mystery of Revelation: Very God and Very Man in C.D:1.2 The Doctrine of the Word of God Hendrickson Publishers p.152 {italics: here is my attempt at conveying Barth’s meaning and call to maintain the “and” between Very God and Very Man – Barth makes it clear that we can only affirm the things that God asserts about Himself to us in Jesus Christ. Part of this is avoiding glorifying the humanity of Jesus at the risk of losing sight of His divinity}
[ii] Ibid, p.156