If you’ve never had the chance to see the African Children’s Choir perform, the next time that they’re in town, chase down the venue.

Not only will you be supporting the children, you’ll also be supporting a Christian charity. A charity that is seeing solid outcomes in the work it is doing among young children from Uganda up to South Sudan.

The African Children’s Choir began in 1984 and it’s been going ever since. By providing education, the ACC seeks to deliver as much opportunity as possible for those unable to provide for themselves.

As we heard from those men and women who have been empowered by it, ACC is a testimony to the warmth of God’s smile and the grasp of His loving and just, grace. Over against tragedy, loss and oppression.

They are a much-needed, humbling reminder to the West, about the power of prayer, God’s emancipating “Yes”, the importance of faith and the significance of gratitude.

The event was held in an upmarket theatre which included testimonies, worship, dance and song.

We weren’t completely sure what to expect, yet, we felt welcomed and left ultimately hopeful for Africa, and our own land. Which is a far cry from the way we’re left feeling when we hear narratives based on popular beliefs about Africa, or when we are sold politicised images that masks the hope behind its Peoples potential.

Overall,  the most striking thing about the African Children’s Choir and their chaperones, was their authenticity, and joy. Clearly expressed, even after sharing stories which illustrated so much sorrow.

As the children told us about their dreams to build on what little, if anything, was left to them, we were amazed by their joy. Warmed by their smiles, and strengthened by their courage.We walked away with a feeling of hope.

This was more than just entertainment. It was intimate and dignified; Holy ground. Where between the Holiness of God and the brokenness of humanity, we were led to an encounter with the totality of His joy in Jesus Christ, through smile, song and drum.

Because it was an event we had planned for home school, as part of a follow-up to it, I asked our home schoolers for a review.

They responded and together we concluded the following: 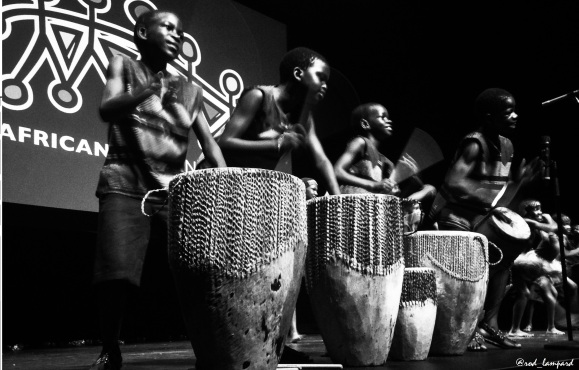 * For the evening photographs were permitted, film wasn’t.