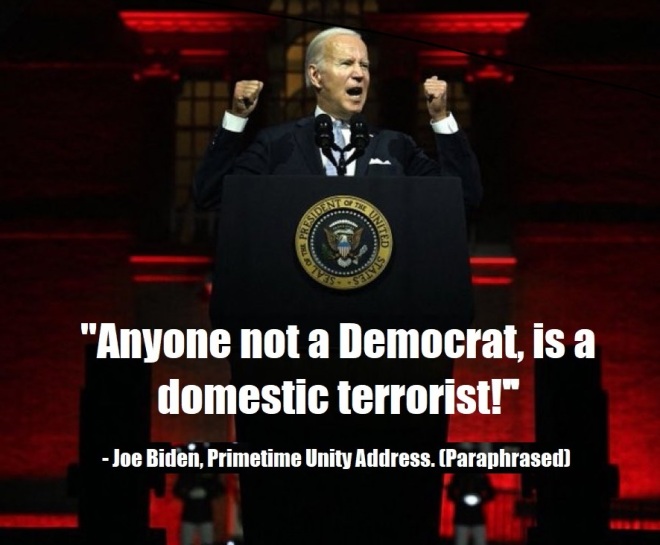 Far-left activists stained the 21st anniversary of September 11 by exploiting the mourning, and massive loss of life to further their own political agenda.

Leading the assault, CNN, and MSNBC contributor, Dean Obeidallah, defamed millions on Twitter as he smashed out a series of tweets declaring Trump, and MAGA supporters are the equivalent of the 9/11 terrorists, including Osama Bin Laden.

Obeidallah then doubled-down, inferring that the former President be denied due process, and placed under house arrest:

“Take a moment and imagine if after 9/11, Bin Laden were allowed to freely travel America, spewing lies in an effort to radicalize more people to commit violence in his name?! Well, that is EXACTLY what Donald Trump has been doing since Jan 6. Time to Arrest Trump!!”

“There’s no comparison between 9/11 and Jan 6 in terms of loss of life. But Jan 6 was far more dangerous to our nation in that it was Americans who waged the attack after being radicalized by Donald Trump. And very dangerously, Trump still travels the nation radicalizing people.”

He added that Trump, and MAGA, needed to be brought to “justice the same way Bin Laden and those involved in 9/11 were.”

After implying that the former United States President should be executed Bin Laden-style, Obeidallah bolstered his unhinged demand, declaring Trump a terrorist mastermind by writing,

“MAGA and Al Qaeda both waged deadly attacks against our nation to end our democracy. The difference is the leader of Al Qaeda has been brought to justice, while the leader of MAGA, Donald Trump, still travels our nation radicalizing people for his next terrorist attack.”

Obeidallah then slammed the door , condemning any critique of his statements as a defence of Donald Trump, and therefore, a right-wing attack on Democracy.

His – anyone not of my political religion, is an infidel, and must die – warmongeringis jampacked full of hypocrisy.

Obeidallah seems to have missed where he crossed the line, consequently doing what he has accused others of being.

His woke rhetoric has all the markings of a Jihadist carrying out a Fatwa.

The left-wing commentator’s ungracious treatment of former President, Trump, and the unbalanced attacks on over 70 million Americans, is yet another example of the Woke White House weaponizing the war on terror against its political opponents.

Obeidallah’s words reflect much of what was intended by Joe Biden, when, in a speech last week, he inferred that “anyone not a Democrat, was to be viewed as a domestic terrorist.”

Amplifying the danger of Leftists conflating the War of Trump with the War on Terror, Harmeet Dhillon, Lawyer and Republican leader, told Tucker Carlson, Trump supporters were being targeted by J6 committee investigators.

According to Dhillon, an alleged ’50 or so [broadly defined] warrants and grand jury subpoenas were being issued to Trump allies.’

Dhillon also explained that the information was being leaked to the media before the summonses were issued, saying the FBI is poised to raid Trump supporters, the way the FBI raided Mar-A-Lago.

For example, Dhillon posted on Twitter, “Our clients, Women for America First, are among those targeted for their peaceful, First-Amendment-protected, speech about the 2020 election.”

She added, “These bullying tactics are designed to target and intimidate Trump supporters.”

The 9/11 anniversary was also exploited by the White House.

This all coincided with Instagram’s “Independent” fact-checkers red-flagging a picture of Donald Trump at Ground Zero as possible misinformation.

Reviewing the fact-check, PostMillennial suggested that ‘Meta’s algorithms appear to be looking to discredit Trump, even when there is nothing to discredit.’

PostMill, corrected the apparent attempt to pad the 9/11, “Trump is a terrorist” false narrative, recounting facts from a New York Times piece, which said,

‘Trump [a private citizen at the time] visited Ground Zero on September 13, 2001, two days after the attacks. He said in 2001: “I have a lot of men down here right now. We have over 100 and we have 125 coming. So, we’ll have a couple of hundred people down here. [Adding] We will be involved in some form helping to reconstruct.”

Fearing a potential landslide, Democrat career politicians are desperate to crush the resurgent Republican party’s chances in the mid-terms.

Leftism is becoming synonymous with lie, divide, conquer; with many on the Left either actively encouraging their political version of Jihad, or actively already fighting one.

So, it seems our predications in 2021 were right:

The war on terror is coming home and ordinary Americans are being pushed into its line of fire.