From time to time there will be that special discovery, one which eases the effort put into making a stay-at-home date night happen obstacle free. The kind that lights up, snapping you out of the drowsy-browsing which can be the unintended side effect of staring too long at a DVD bookshelf wondering what to watch.

After exhausting my pursuit through the over-watched options available, I decided to surprise my wife by downloading an itunes Movie rental, which had caught my attention, called ‘Romantics Anonymous (English title) // Emotives Anonymous (French title)’. 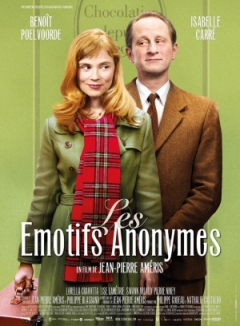 Being a French film ‘Romantics Anonymous’ is subtitled in English, which isn’t too bad if you’re keen to expand a very limited French vocabulary or perhaps practice one. For example:  Not having taken up French lessons in high school, I am almost confident enough to say that I now know what “Bonne chaunce” means: good luck (still, probably best not to quote me on this particular translation).

The storyline begins with the protagonist Jean-René and coincides with his meeting of Angélique.

Both are chocolate makers or chocolatiers and both struggle with anxiety issues. Of interest to this blog writer in particular, anxiety becomes the primary antagonist. You could say that the love of chocolate is the binding agent and anxiety the separating one. As a result this polarity creates a base for a good portion of the non-verbal communication delivered with comical precision throughout the movie.

The plot is centered on chocolate and the main setting is Jean-René’s struggling chocolate business, Angélique’s recovery group and Jean-René’s psychologist’s office.

The pace of the dialogue, suspense and humour increases twofold, once Jean-René hires Angélique without realizing her hidden talents as a chocolatier, or the battle they share with the paralyzing fog of anxiety.

The story contains only one bedroom scene, which is subdued and ambiguous enough to encourage an appreciation for its well timed and almost dignified place in the film.

From a Christian perspective this is the only real downside i.e.: – the main characters, not married; seem to play into the modern-consumerist philosophy of sex and intimacy.

Outside that minor irritant, this story is about the importance of telling ourselves and others the truth. It is about being vulnerable and taking healthy pride in our contributions. ‘Romantics Anonymous’ is a very human story about relationships and the impact anxiety has on both men and women as they journey together.  The story turns interpersonal problems with anxiety on its head in a humorous fashion, empowering awareness of anxiety and the debilitating effects it can have on a person.

The film was a surprise find that left me wondering about the healing authentic encouragement and support can bring. Especially  when such support stands for the truth-as-it-is, as opposed to the truth-as-it-is-assumed to be.

As a comedy ‘Romantics Anonymous’ or ‘Emotives Anonymous’  is unique, and yet at the same time very European. Like the German film ‘Mostly Martha (Bella Martha, 2001)’, which is another great film and a lot more convincing, in my opinion, than the 2007 American version ‘No Reservations’.

We heartily recommend it.

…’And when they had read it, they rejoiced because of its encouragement’ (Acts 15:31, ESV)